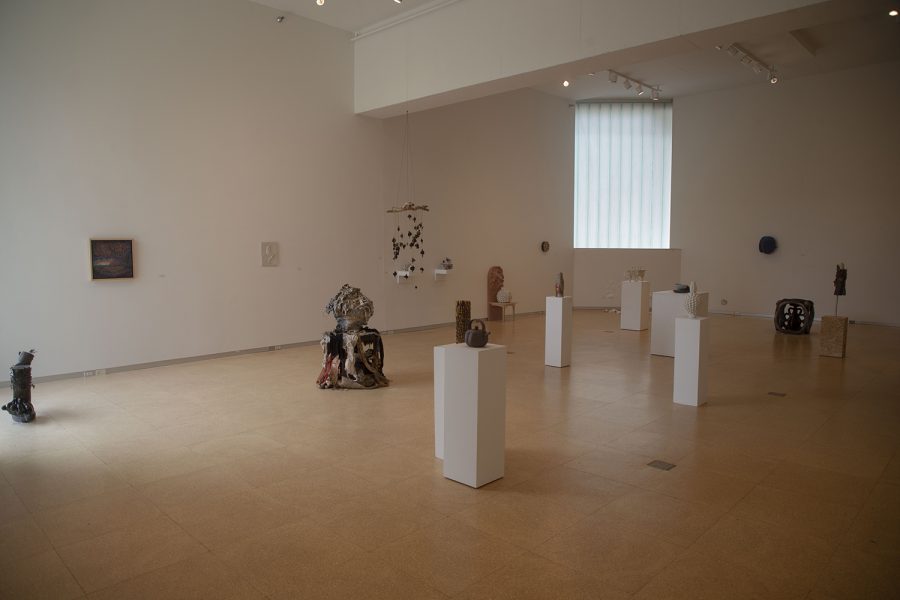 The first of nine invitations to the program, the Ceramics Invitational Show features the work of more than 50 graduate students and faculty from six universities, including the University of Iowa. Alongside the exhibition, there will be a related symposium on September 22-23, with guest lectures, demonstrations and tours.

Step inside the echoing four stories of the University of Iowa Visual Arts Building, and visitors will have a choice: go straight into the open Lasansky Atrium or turn left into the sunny Drewelowe Gallery . There is a third option, however – is the hidden Ana Mendieta Gallery on the second floor.

Last year, Casto said the school’s director of art and art history, Steve McGuire, came up with the idea of ​​holding a national exhibit in each of the school’s departments. Once accepted, ceramics was chosen first, and Casto began deciding which outside school programs UI would invite.

After ceramics, the school’s other nine programs will go through their own invitations over the next three years. Casto said he hopes to hold the Ceramics Invitational Show again in 2025.

“When we organize an exhibition like this, we provide a space for dialogue between people who make ceramics in higher education institutions than our research institutions,” Casto said.

The works of artists from each of these schools have been carefully preserved in the three spaces of the visual arts building. The pieces were exhibited on August 29 and will be on display until September 30.

Transforming into the usually quiet Drewelowe Gallery, guests are struck by the sound of soft chirping insects from a piece titled night song by University of Florida faculty member Jesse Ring, placed in the center of the room.

Ceramics of all materials fill the area, flooding from the floors to the walls. On the back wall hangs a circular ceramic piece with a color wheel: blue, purple, green, orange, yellow. Standing closer, the viewer will see wooden matches and a matching striker on the side.

Shannon Goff’s work Balsamic Circle was inspired at the height of the pandemic. Goff is the head of ceramics at the Penn State School of Visual Arts and an associate professor of art. When Goff reflected on what got her through this tough time, she noted incense burning – which, like ceramics, involves mixing a wet mass and a dry mass.

“I thought if I was going to do a job like this, I should definitely figure out how to make incense and go all the way, not halfway through it,” Goff said. “I eventually learned that making incense is not unlike making small batches of scented clay.”

His goal with the piece is to allow the viewer to explore and discover an imaginary landscape, find all the separate pieces – the incense, the matches and the attacker – and ultimately participate in the work.

Goff will join UI and other schools involved in taking a look at the work of the Invitational and engaging in the associated symposium on September 22-23. The symposium will include a lecture by renowned contemporary ceramicist Amy Santoferraro, as well as demonstrations by various faculty members and a tour of the newly opened Stanley Museum of Art.

Casto said he looks forward to the community aspect of the symposium. When organizing the event, he did so thinking about how he could help his students.

“My hope is that our students will connect with faculty from other schools that they might populate down the road, that they will befriend other artists at other institutions, and then that exhibitions or opportunities happen because of that,” Casto said.

Casto’s duo of pieces in the show, Untitled Accumulation Ships, can be found in the vast, sunken atrium of the art building. The pieces consist of large porcelain jugs that study shape, color and form, in the tradition of his years of working with the material.

The surface treatment of precious metals, including real gold, sparkles in the light drawing the eye from other intricate pieces in the atrium.

Going up to the second floor, in the Ana Mendieta Gallery, visitors can find another room filled with diverse ceramic art.

UI Iowa Idea Visiting Professor of Ceramics Sydney Erwerth’s bright red and orange shaded table is located in the center of the room. She said she draws on her interest in architecture during her creative process, often using materials like clay, plaster, resin and grout.

The inspiration behind the confusing-looking structure on top of the table, Erwerth said, stems from the energy in a moment between people at a table.

Whichever space a ceramic-loving guest visits first, there will be a radiant variety of contemporary pieces to look at, crafted by students and faculty from across the country.

“I’m thrilled that this community is coming together,” Erwerth said. “I have seen that in different ceramic communities in different universities, the ceramic studio cannot just have one person to thrive, you need a team.”