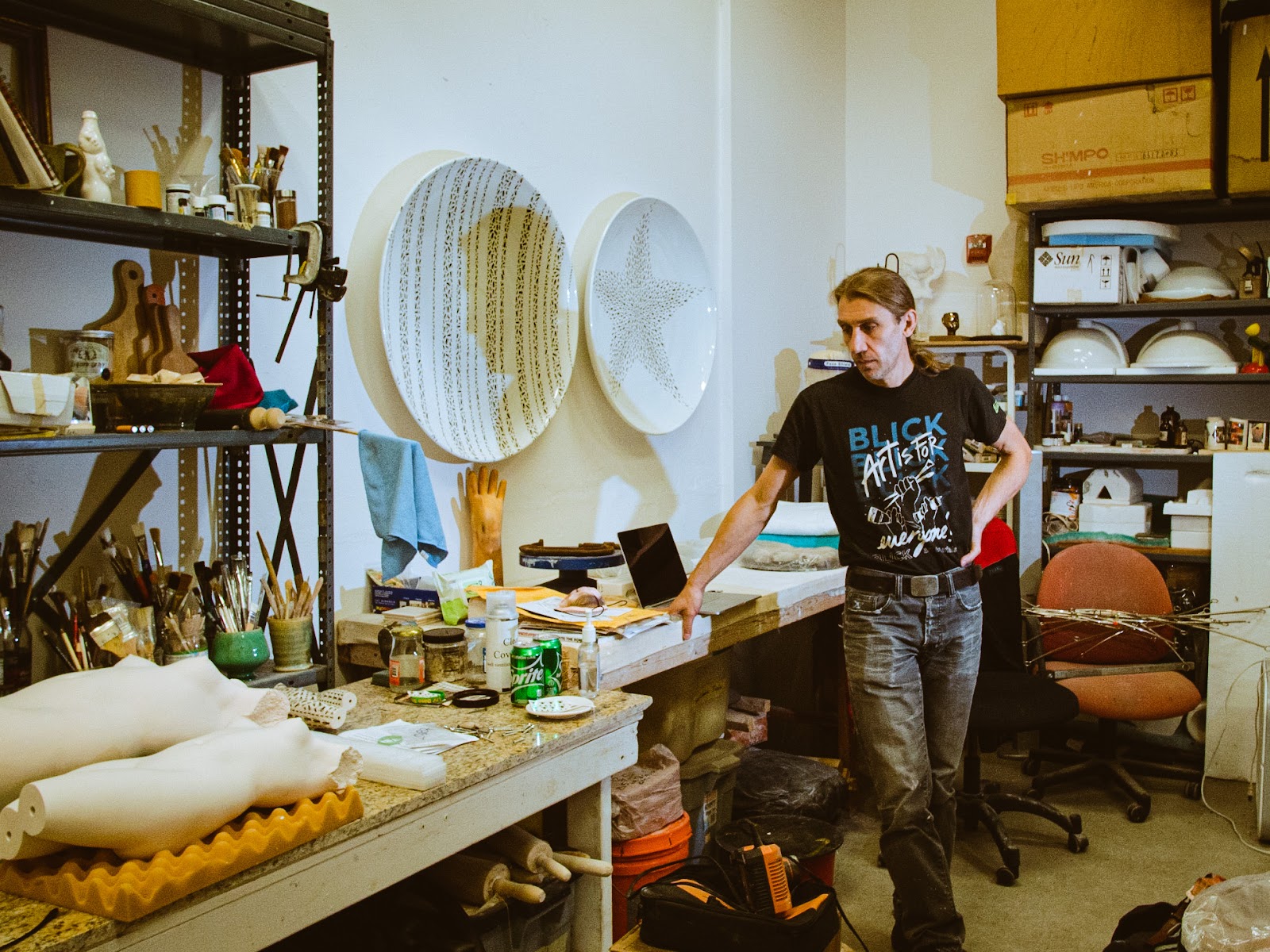 UM professor Ivan Albreht, in his motorcycle jacket and goggles, strides through his busy studio, trying to tidy up an otherwise impossible task.

“Sorry for the mess,” he says, storing brushes in makeshift plastic cups.

However, the mess in Albreht’s studio was pieces becoming complete, the rudiments of the art, the story of one man and his experimentations with different materials and techniques.

Albreht teaches ceramics and sculpture in the art department at the University of Miami. Featured in this year’s UM faculty exhibition at the University of Miami Gallery at Wynwood is his work “Great 8 (G8) With a Small Problem”. It displays a wall of masks, all depicting the smiles of world leaders – including Vladimir Putin, Donald Trump and Angela Merkel. It was a reaction to the G8 summit in 2020, an annual gathering of world leaders from the eight most powerful economies.

“I see that today we are losing a battle against our own creation,” Albreht said. “Even in one of the most catastrophic years in recent times, they were there, smiling as if nothing had happened.”

Born in the now-fractured Yugoslavia, Albreht ventured to the United States, in search of a better future.

“When I was at customs, I was asked to tick the box for the country I was from,” Albreht said. “The problem was that Yugoslavia was no longer there and I didn’t want to take sides.”

Albreht recalled life in the 1990s when cultural and religious differences between different ethnic groups in Yugoslavia quickly turned into a bloody civil war, splitting the nation into five parts.

“They gave me trouble, so I checked China and they let me through,” Albreht said.

Albreht’s works depict various themes, including the fragility of systems and the illusion of certainty. In a series of works around ceramic plates, Albreht breaks down ceramics and puts them back together again, with flies crawling.

“I want to challenge someone’s concept of beauty,” Albreht said. “The cultural association of a fly is a bad thing, but to me it’s just points.”

Seeing the breakdown of political systems in his youth, Albreht turned to art to further explore the phenomenon.

“It made me look at things from different angles. Never hold one truth,” Albreht said.

Ironically, the forms produced by such a process reflect the break-up of nations and the borders that separate their sovereignties.

In recent years, Albreht has moved away from traditional practices of pottery and sculpture and focuses more on reusing old pieces from pieces.

“We spend a lot of energy pulling these materials out of the ground and hardening them into a brick and they end up on this planet who knows how long?” said Albrecht. “In the context of all that is going on, what is the relevance of this personal activity which is a little elitist? What can I do as an artist that could work outside of this? »

Instead of sourcing more materials, Albreht ventures to thrift stores like Goodwill to give items a second life. Albreht is also experimenting with 3D printing and other digital techniques.

In the beautiful mess of his studio there is a certain honesty to the space, an honesty that runs through all of Albreht’s work, both as an artist and as a teacher.

“I love teaching, I find more value in it than creating art in the studio,” Albreht said. “When you venture out as a professional artist and you have to go out there and survive on your work, you have to make a lot of sacrifices, because you’re talking to the public.”

As an academic artist, Albreht finds himself outside of such pressures, outside of the need to achieve something he is not.

The last time Professor Albreht’s work was featured on UM’s main campus was during his solo exhibition at the Lowe Art Museum in 2011. Although another exhibition has been scheduled for spring 2022, it has been postponed and a new date is yet to be determined. To see more of Albreht’s work, see his website at www.albreht.com.

These series of reports represent an intention to integrate the artistic community of UM into a larger whole, in order to learn their stories and expose their work.