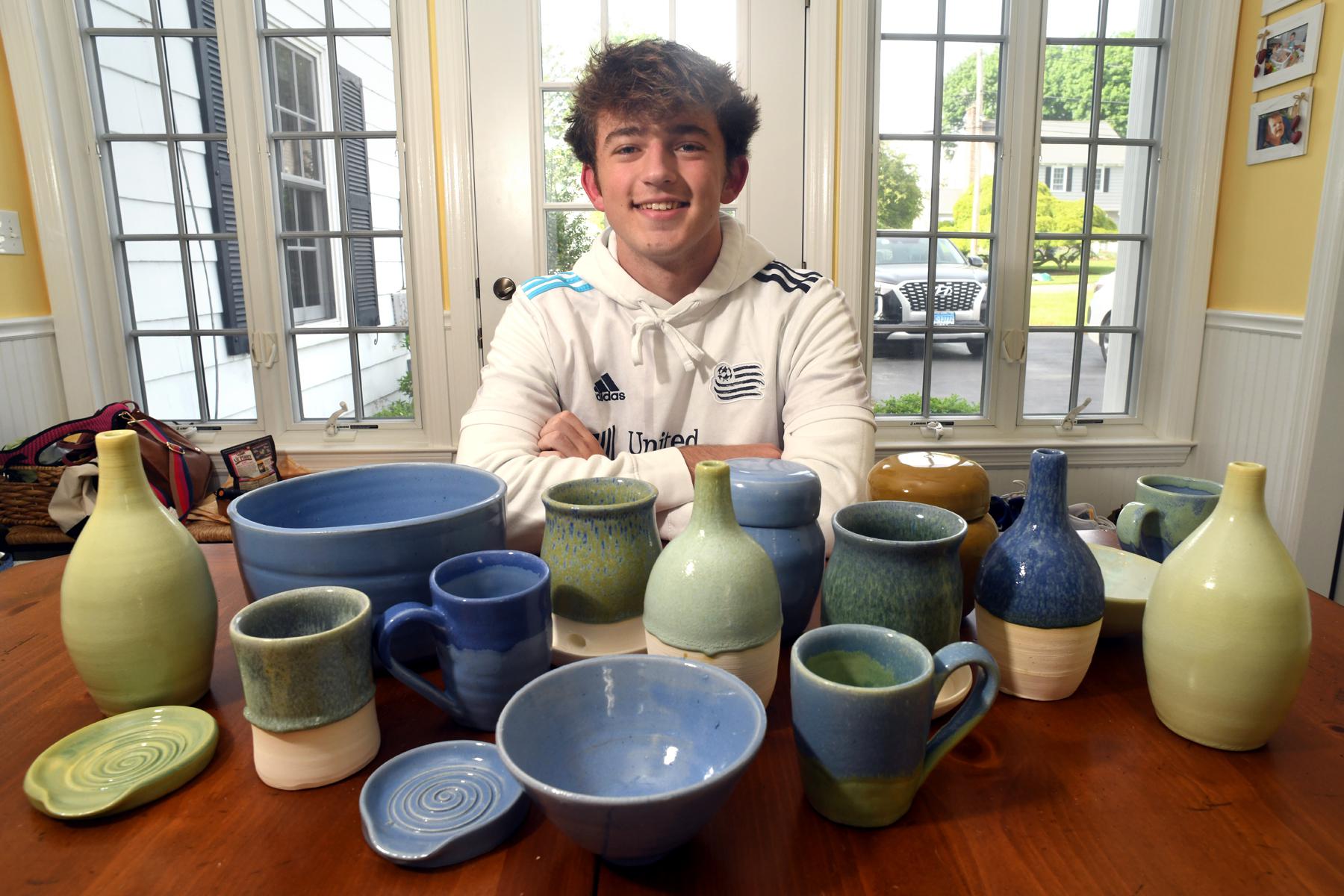 TRUMBULL — Not every teenage athlete would sacrifice a meal to make pottery, but Matthew Wich has done it many times.

The Trumbull High School junior and football player has loved ceramics ever since he took a freshman class.

“Last year I was skipping lunches to go to the pottery room to throw coins,” Wich said. “You can always improve. You can always find out more.

His love of ceramics led him to make around thirty pieces. While he enjoys creating, Wich soon realized there could be a greater purpose for his passion.

During his sophomore year, he began applying for 501(c)(3) status for a nonprofit that eventually became Ceramics for Soccer. Through the program, Wich sells his ceramic pieces to raise funds for the Aspiras Foundation, which provides equipment and monetary donations to soccer clubs in the Dominican Republic. So far, Wich said, he’s sold 11 pieces and raised about $500 between sales and other donations.

He came up with fundraising as a way to merge two things he loves – ceramics and football – to help others.

“Development and developing countries are subjects I learned a lot about in school,” said Wich.

Who added that he also learned that football can be a valuable outlet for young people in developing countries. The Aspiras Foundation website echoes that idea, telling how the nonprofit began with two Western Michigan University students collecting football gear for clubs in low-income areas of the Republic. Dominican.

“By investing our time and effort in education and providing unprecedented opportunities in every possible way for children of football clubs within developing communities, we hope to empower them to aspire to great goals. and to great accomplishments,” the site reads. “The future of developing areas in the Dominican Republic rests in the hands of children, so we want to give them the tools to make positive changes in their communities.”

Football has always been an important part of Wich’s life. He said he started playing in Trumbull’s American Youth Soccer Organization when he was 4 or 5 years old.

“I’ve been playing since,” he said, adding that he now plays on the Trumbull High football team.

Once he heard about Aspiras and the role football can play in children’s lives, he wanted to help. And ceramics seemed like a good way to do that, Wich said.

“A lot of people said it was a big adventure for me,” he said.

Among those who support him is his ceramic teacher Trevor Youngberg, who said he enjoyed watching Wich’s passion for ceramics grow over the years.

“Matt immediately took to the wheel and showed a keen interest in mastering the basic skills of centering, pulling and shaping clay on the potter’s wheel,” Youngberg said. “Once Matt gained the ability to meet and transcend the forms that resided in his mind, he was hooked.”

Youngberg said he’s been watching with interest as Wich has used ceramics as a cornerstone of his nonprofit.

“I’m proud to witness Matt’s personal and creative development as he pursues his gifts and passions,” he said.

Who said he would continue with Ceramics for Soccer for as long as he could – or at least as long as he had access to a pottery studio.

“I have no intention of letting this end unless I have to,” he said.