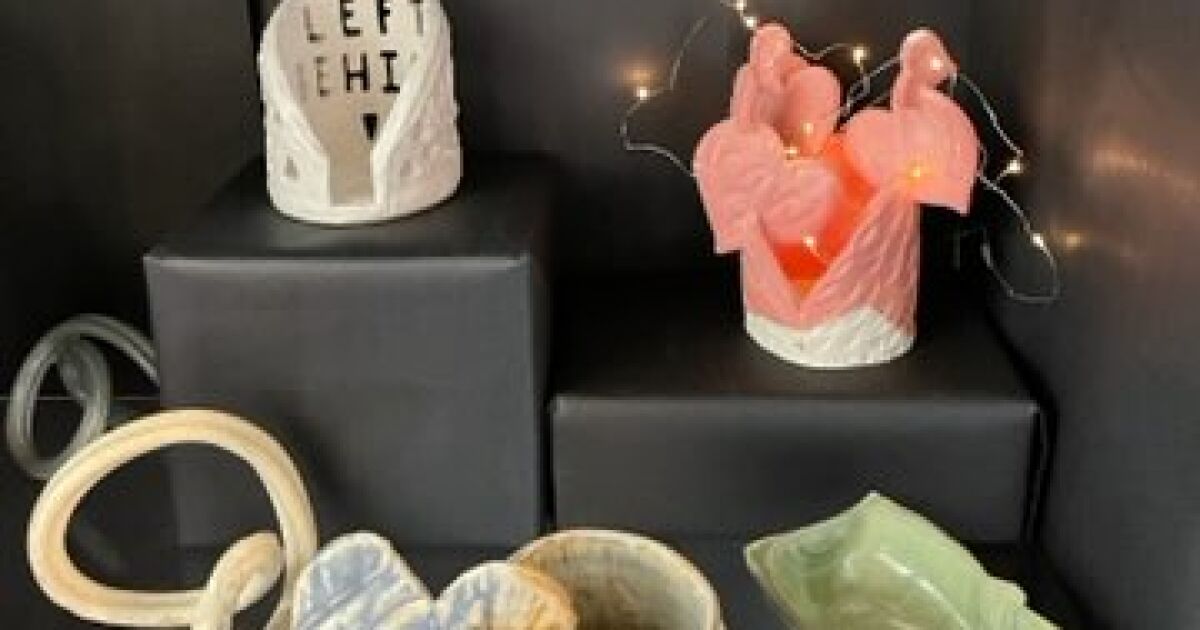 Facing the death of a loved one earlier this year, Amelia Eastman felt a range of emotions. To help her heal, she used clay to create hearts and other sculptures to understand what was going on in her own heart.

A collection of Eastman pieces is on display at the La Jolla/Riford Library in a display case near the main entrance, along with a notepad for people to write down what helped them through their bereavement. There is also a container to place the notes. The collection was installed this month and will continue through October.

“Grief is so personal, and so is how you deal with it,” Eastman said. “I wanted to hear their stories. I want to learn from others.

Eastman, a physical medicine and rehabilitation specialist at UC San Diego in La Jolla, said she wanted to create the exhibit to “present those who are grieving with an idea” of how to heal.

“In my job, people open up to me and there are a lot of people who are grieving,” she said. “The pandemic has caused a lot of change, and there are people struggling with loss.”

Eastman became one of them when her loved one died in February (she wouldn’t release any further information about the person or the nature of the death). Around this time, the UCSD Crafts Center reopened after its predecessor closed and was demolished in 2012. The new 11,000 square foot Crafts Center is open to the public when not hosting classes or of workshop.

“I did ceramics for a long time, but then I took a break,” Eastman said. “Having a tangible form in your hand that you can hold, adjust, give…was important.”

In the exhibit are hearts and other sculptures that Eastman made at the Craft Center to show the different feelings associated with the loss of a loved one. There is also a QR code that links to a video showing the storefront creation process.

Producing the exhibit “helped me take something unimaginable and complex and turn it into something purely emotional,” she said. “It’s wonderful to take something so overwhelming and make it simple and manageable.”

Eastman said she wanted to have the exhibit at the La Jolla Library because “I love this library” and she thought it would reach a variety of people.

“La Jolla/Riford Library is often on the lookout for meaningful examples of community art, and Amelia Eastman’s bereavement-themed sculptures are deep and very personal,” said Branch Manager Bill Mallory. “Besides their artistic merit, they also spark much-needed discussion on the subject and allow the feelings of library patrons to be part of the exhibit.”

Overall, Eastman finds the work “exciting and aesthetically pleasing,” she said. “It’s exciting for me to see an emotion that I had sent back to me, but it’s different to look back at myself. I don’t feel the same sadness as when I did. The product didn’t not the same feeling. He feels transformed, and that’s something I’m proud of.