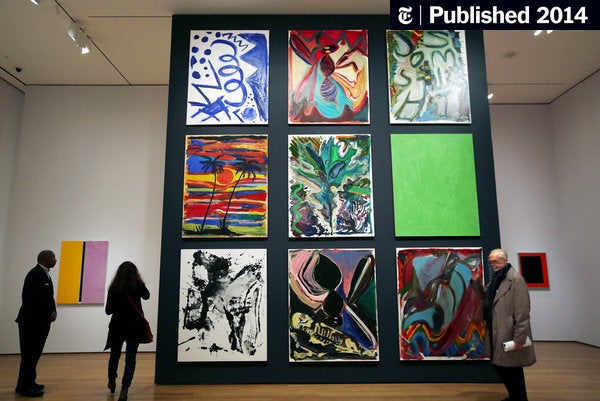 “The Forever Now”, a survey of contemporary painting at MoMA

Therefore, artists come in and go, and different are predominant, when you retrace your steps, as it should be. The work of Josh smith, perhaps the rougher artist here, is (perhaps deliberately) invisible until you reach the final space of the show and turn around. Mr. Smith’s nine canvases recklessly sum up the show’s flawless attitude, tripping the fantastic light with variously monochrome, gestural, and figurative works, as well as a kitsch sunset and the signature of the artist, in great zany.

The contrasts between the artists are sometimes so glaring that they seem sure to set in motion even the mind of a novice. At the entrance, the large, richly textured and tinted paintings on paper, Kerstin Brätsch’s latent Symbolists – which suggest masses of silks or rustling feathers – flank a wall of works from which they could not be more different: the emblems of Joe Bradley simply drawn in pencil grease on raw canvas, reminiscent of children’s drawings. But the richness of detail in Ms. Brätsch’s works introduces you to the unexpected subtleties of Mr. Bradley’s rudimentary approach. The rudimentary perpendicular forms of his “On the Cross”, for example, are enhanced by repeated diagonal folds in the canvas, evoking the winding of a bandage, a shroud or a diaper.

Rashid Johnson’s voluptuous black paintings, whose thick graffiti marks are scrawled in a mixture of wax and black soap with a broomstick, confront the more delicate and colorful improvisations of Michaela Eichwald, which seem impressive but more apt than d ‘habit.

After that comes a conversation about carefully but thickly applied paint which is one of the best face-to-face sessions on the show. On the one hand: the colored curls of Mark Grotjahn’s palette knife, which define a deep space but are also dotted with slanting lines, and the frank, masked faces of Nicole Eisenman, laid on thick, textured plates of color. They recall the early modernist faces of Alexej von Jawlensky, but on a contemporary scale and with references to our present politics: a raised fist (white) here, collages of African sculptures elsewhere.

Sometimes the spectacle is so clear that one has the impression that artists or works have been chosen to fill niches, to demarcate positions as much as for themselves. You almost imagine Ms. Hoptman going through a list of highlights.

Interactive? Check: Mr. Murillo has eight additional unstretched canvases on the floor that visitors can unfold and look at, like rugs in a bazaar.