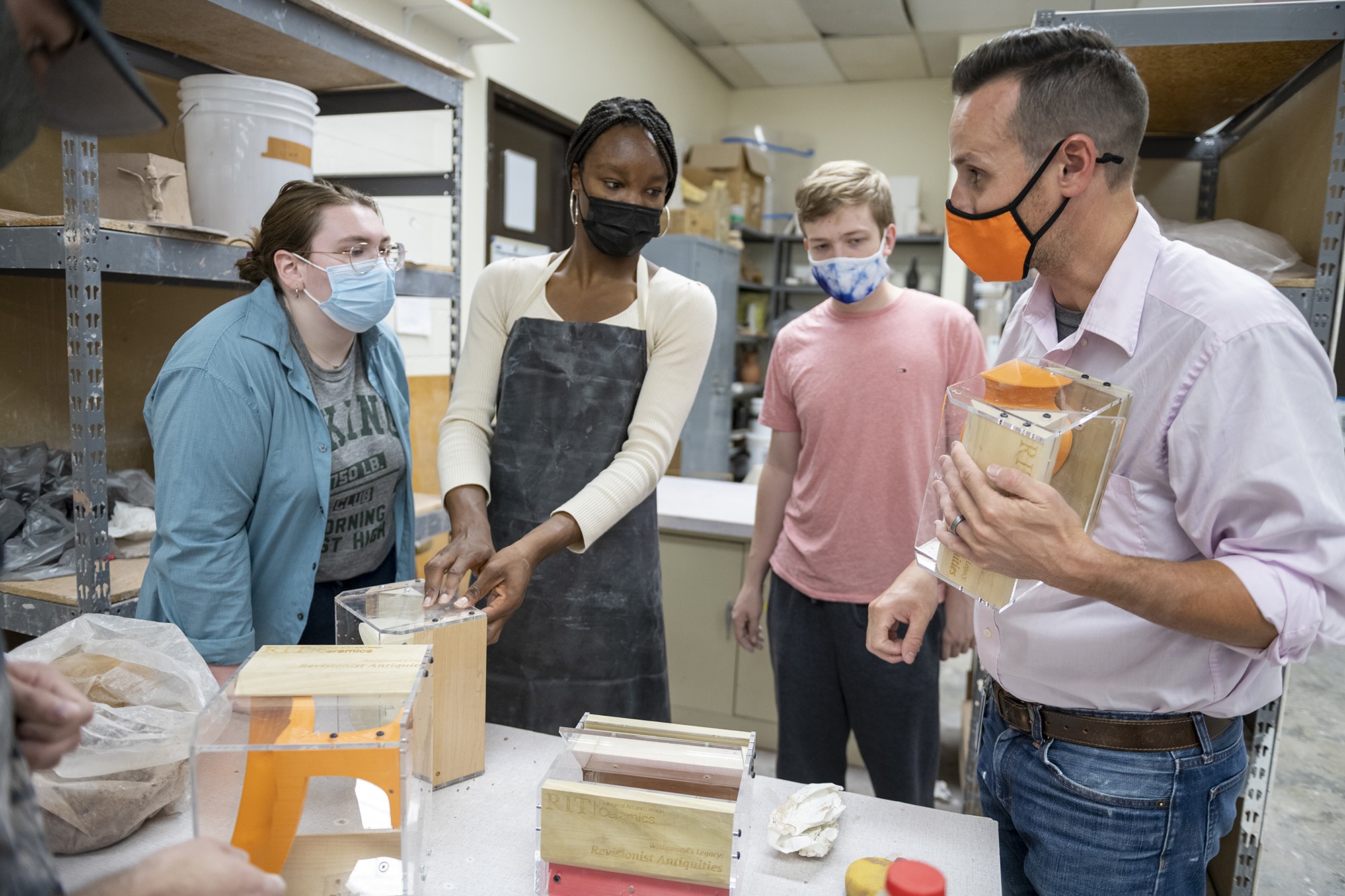 A computer scientist builds a casting system that comfortably houses a ship he 3D printed while a physics student carefully pours plaster into its structure. Curiously, design, marketing, psychology and public relations students navigate the same multidisciplinary process, creating an enthusiastic energy in the studio.

A ceramics course for non-majors offered this semester represents the connective tissue between early forms of pottery and today’s contemporary practices. Twelve students from Rochester Institute of Technology majors are immersed in Josiah Wedgwood’s Legacy course, which exemplifies the university’s strategic focus on technology, arts, and design.

Taught by Assistant Professor Peter Pincus, the course explores the parallels between the innovative methodologies of ceramics and manufacturing in the 18th century and the role that modern manufacturing processes play in these fields today.

Lindsey Bouthiette ’22 (psychology), who previously studied ceramics in high school, said she signed up for the course to re-immerse herself in the material, while learning new techniques and processes like 3D printing .

“The experience is very engaging and based on us working together as a class to get through it,” Bouthiette said of the Revisionist Antiquities project. “We have faced various challenges along the way and had to improvise in difficult times. What I take away most from this mission is to recognize the artists’ dedication to plaster mold making and ceramics. It takes a lot of hard work in every step to make a mold. 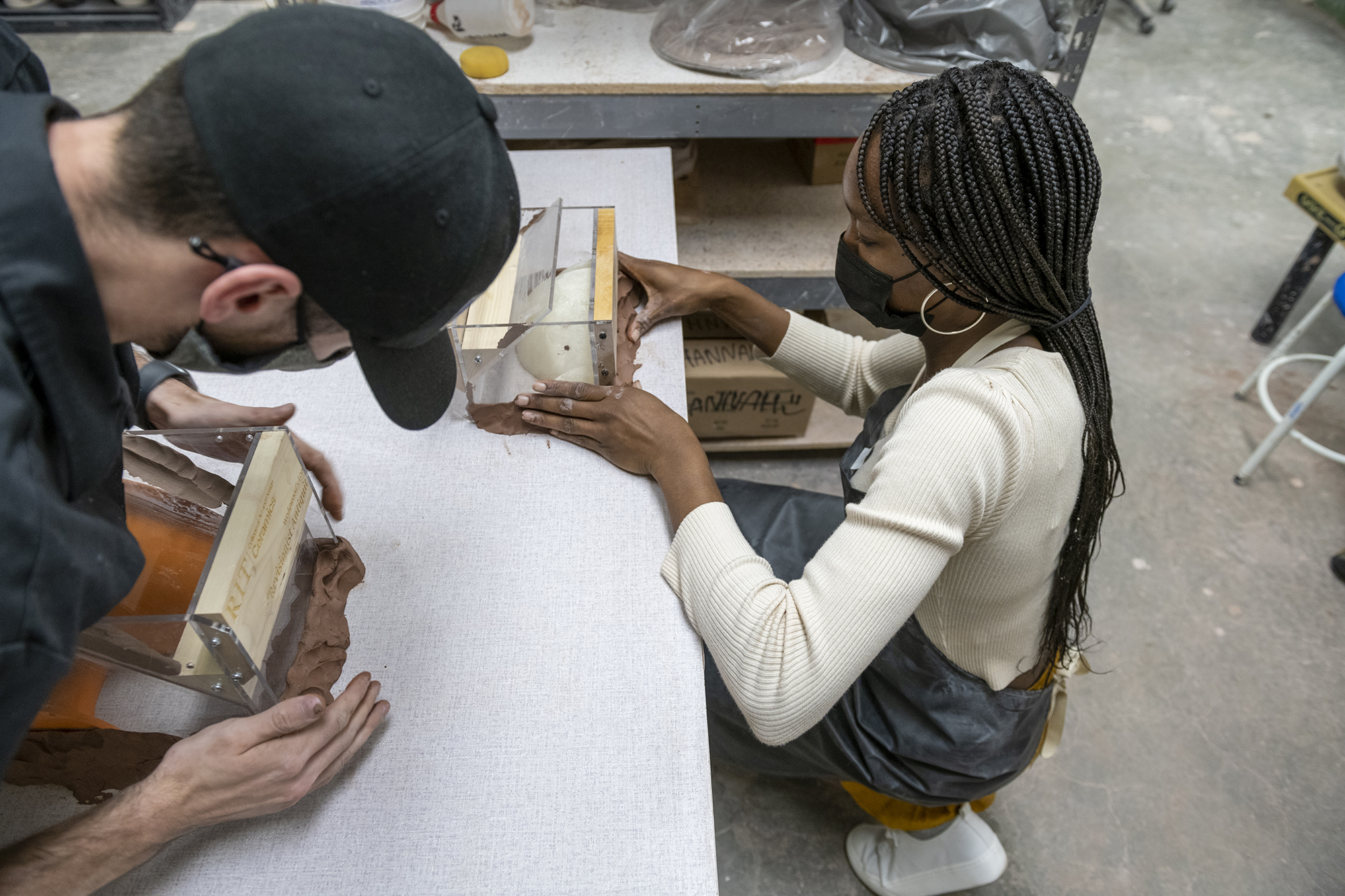 The inspiration for replicating the Etruscan style of pottery popularized in ancient Greece can be traced to the course’s namesake, Josiah Wedgwood, an 18th-century potter and social activist known for his pioneering manufacturing and marketing techniques. 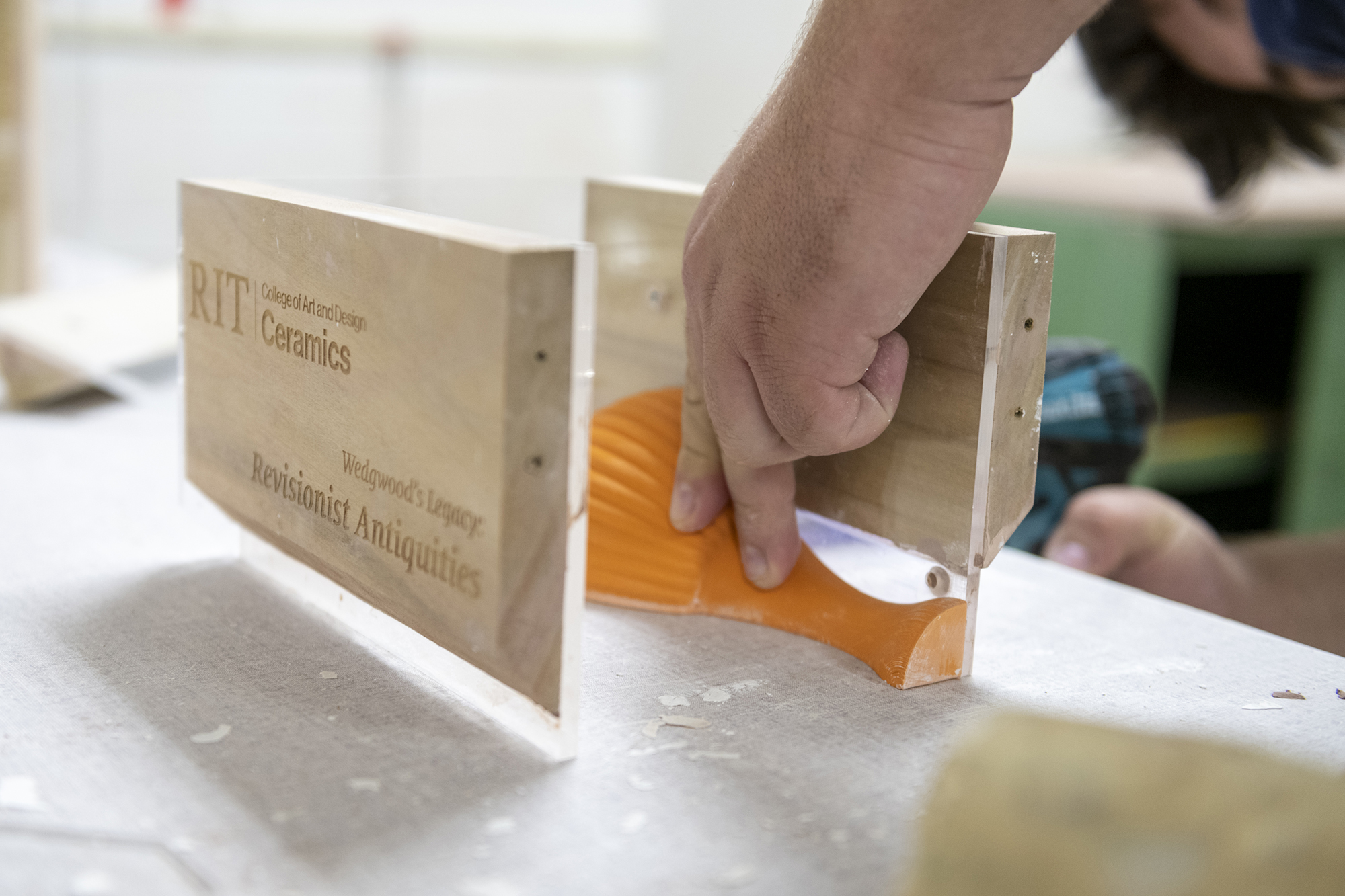 His methods provided the middle class with unprecedented access to Etruscan ships that had traditionally been available only to the wealthiest people in Europe.

Wedgwood’s mission was supported by a relationship with British diplomat Sir William Hamilton, whose extensive collection of Etruscan ships has been documented in a catalogue. The Complete Collection of Antiquities from Sir William Hamilton’s Cabinet is a complete chronicle of each ship – plans, renderings and facades drawn in minute detail.

“He collectively showcased the breadth of Greek and Etruscan pottery,” Pincus said.

“In many ways, Wedgwood should be considered the world’s first 3D printer,” Pincus said. “His creative use of technology, materials and process, coupled with his unequivocal craftsmanship, has enabled him to resurrect objects from antiquity.” 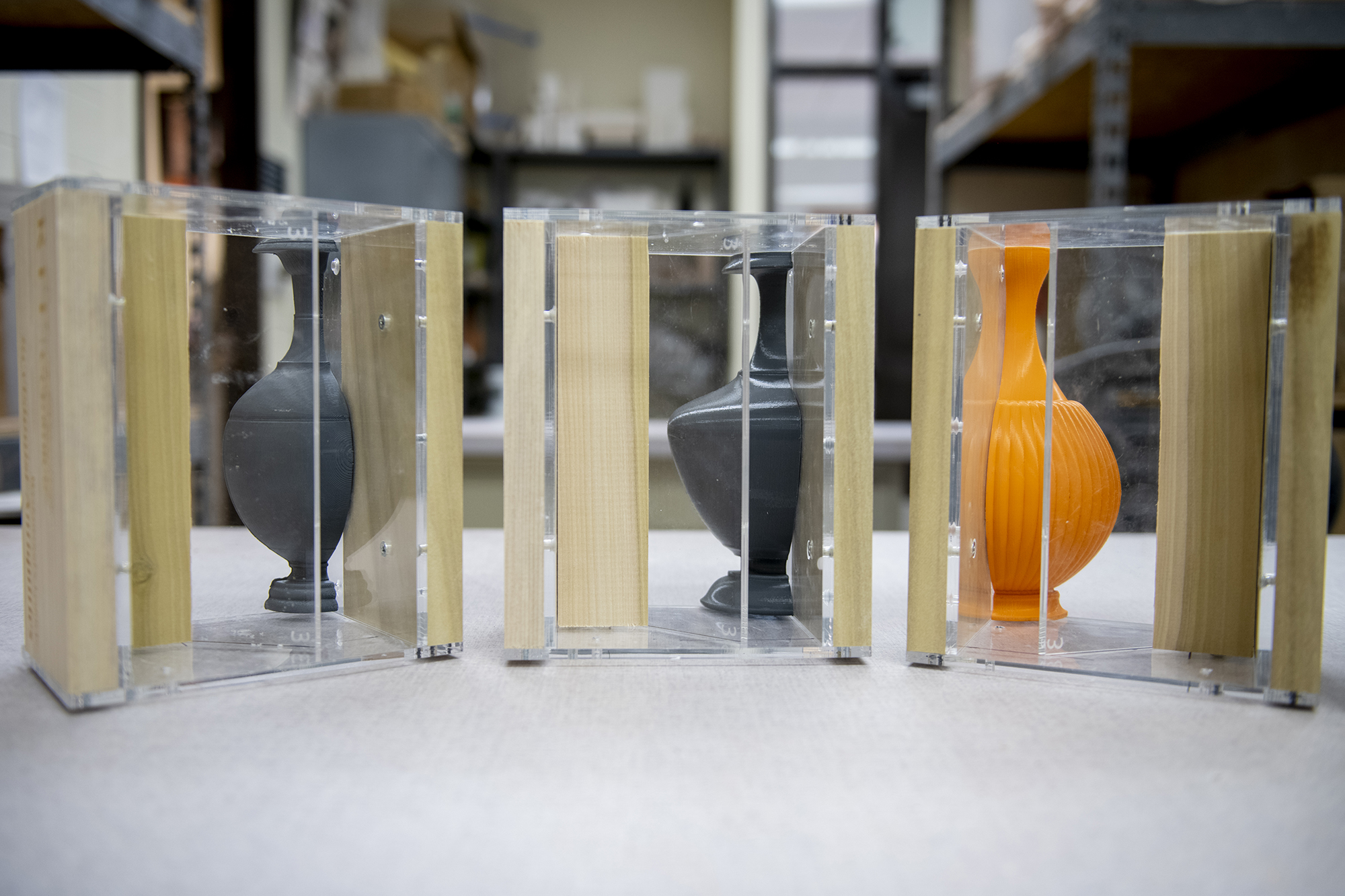 The students built their own mold systems, complete with quarter containers that they 3D printed in RIT’s Fab Lab.

They each chose a pot from The complete collection of antiques, drew a computer-aided design (CAD) profile of it and cut out a quarter of the design to be 3D printed in RIT’s Fab Lab. They then assembled a working mold system by attaching the design inside precision laser-cut pieces of acrylic in the Fab Lab. 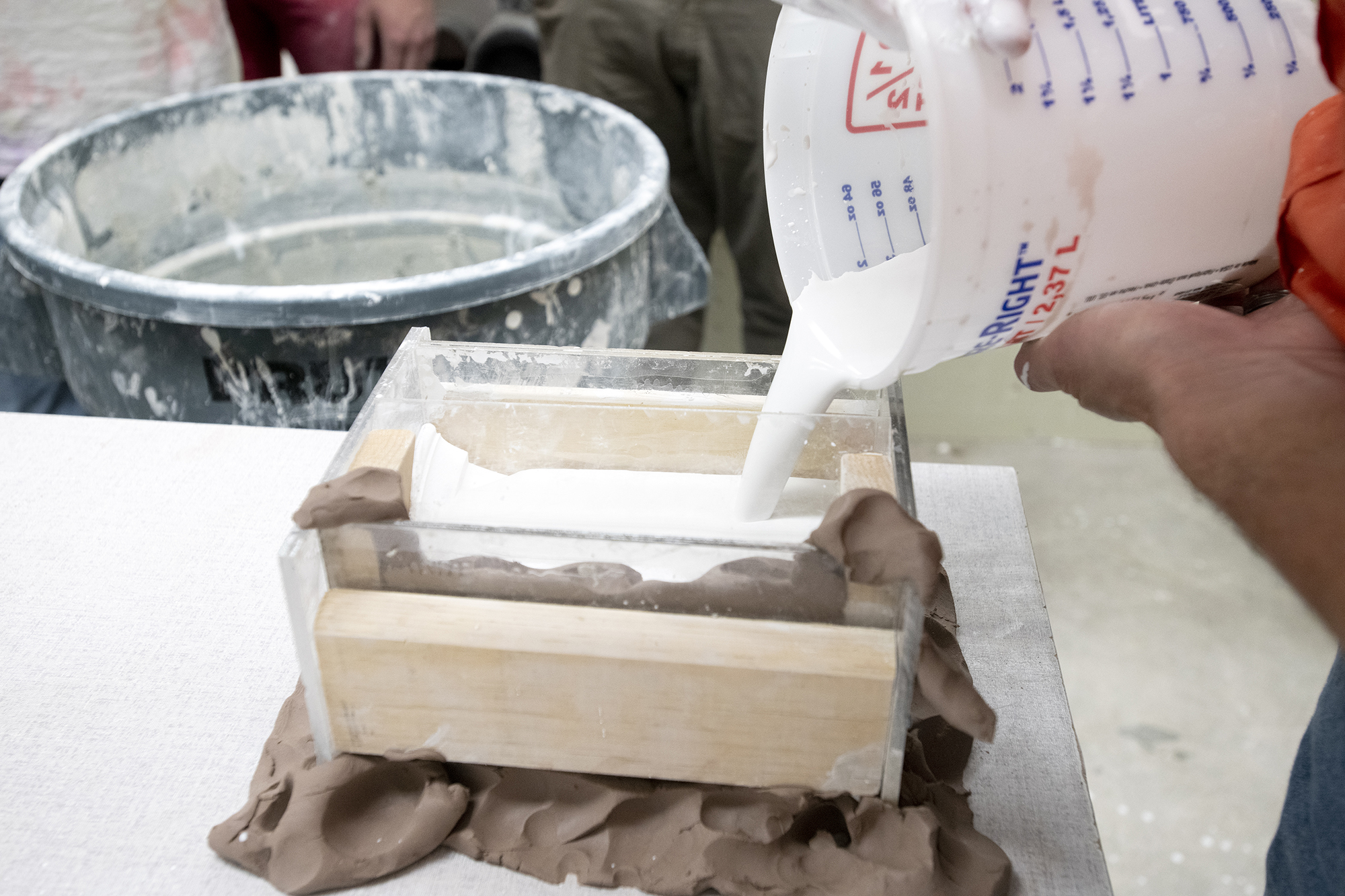 Once the mold systems were constructed, students filled them with plaster to create a quarter mold. The process was repeated three more times so that each quarter could be cast together to form a replica of an ancient Greek vessel.

Once the models were created, the students poured plaster into their mold systems four times and clamped each quarter together to create a replica of their selected fourth-century vessel. This replica was then used as a plaster mold to quickly mass-produce more vessels to use as glaze tests and experiments. 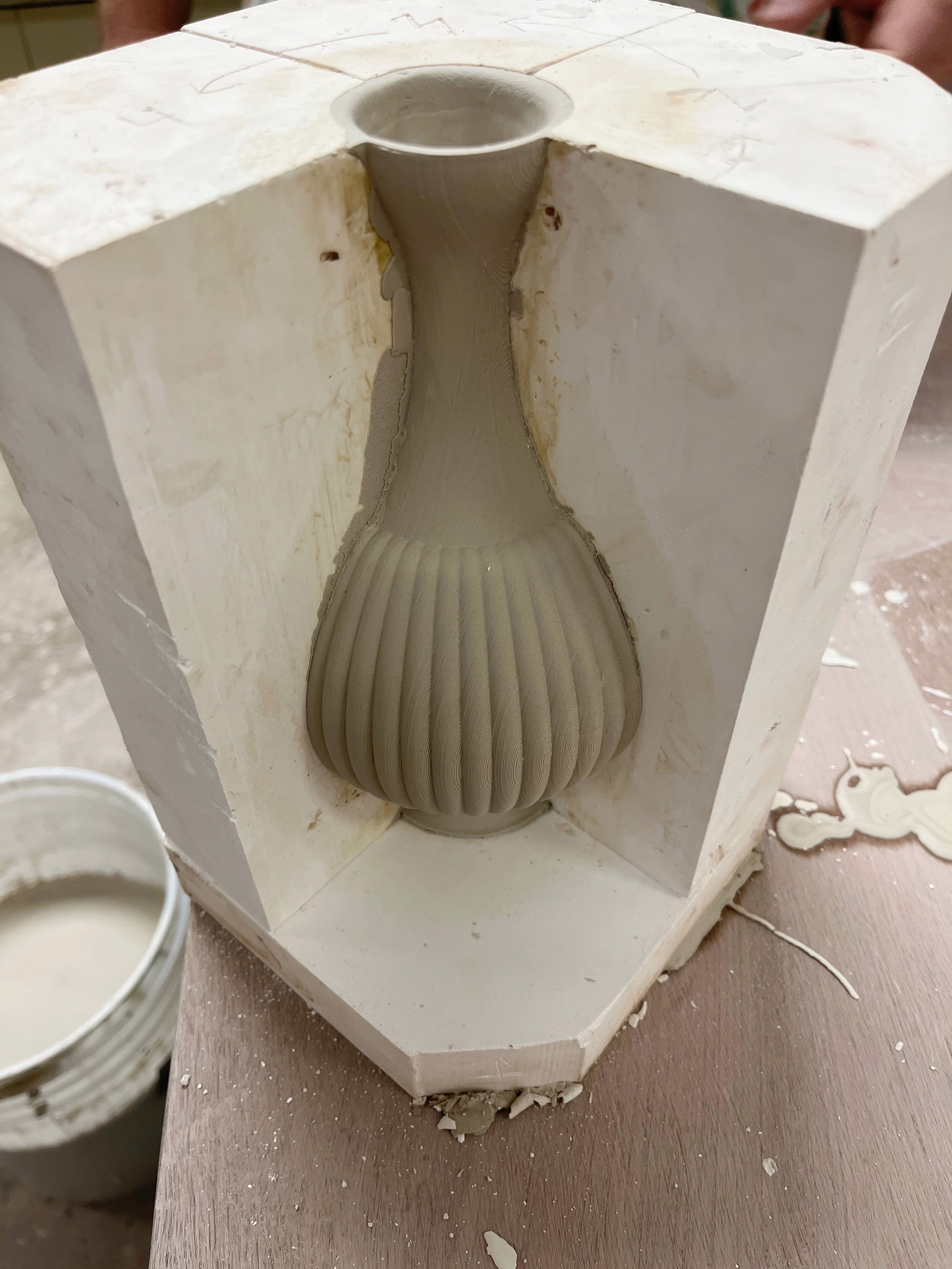 Bouthiette designed an alabastro, the antique version of a perfume or oil bottle that has a long body with a round base and a lip at the top.

“I didn’t know I would be working with 3D printing or CAD during a ceramics class,” Bouthiette said. “It was such an exciting experience because it combines new technologies with old pottery techniques and practices. I like the idea of ​​bringing an object back to life through all these different materials and processes.