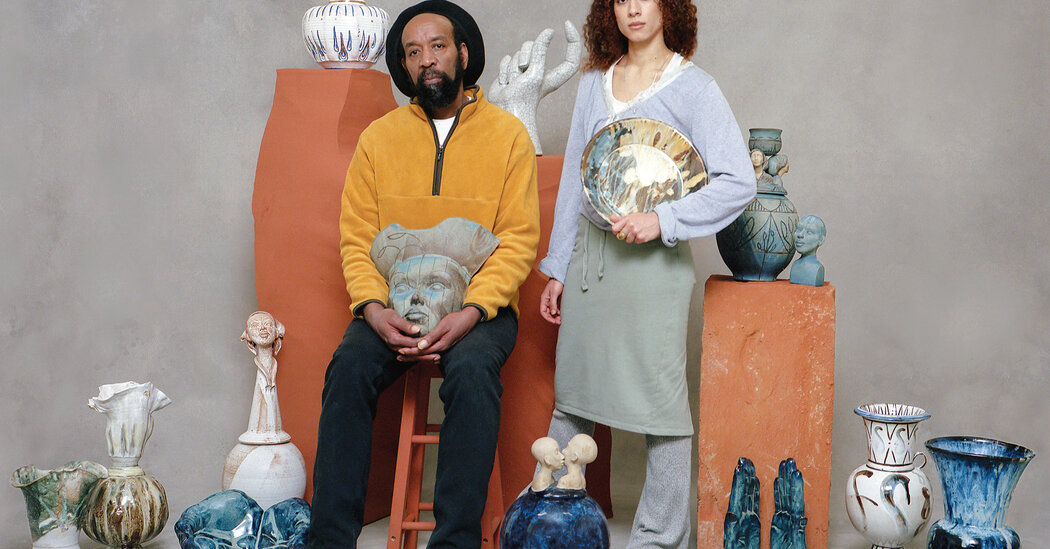 THERE ARE FEW objects as representative of traditional British design as the Staffordshire dogs. Perched in pairs on chimneys across the country in the late 19th century, these terracotta figurines of golden-collared spaniels and other dogs embody both a fantasy of rarefied country life – Dash, Queen Victoria’s beloved pet, was a Cavalier King Charles – and the people. conformist tastes. Indeed, the pieces were among the most sought-after creations, along with delicate floral-patterned bone china tea sets and intricate neoclassical jasper vases produced by the Potteries, the pioneering group of factories, eventually numbering in the hundreds. , established in the 17th century in the mining towns that form the present city of Stoke-on-Trent. With the rise of large-scale manufacturing in the 18th century, led by innovators like Josiah Wedgwood, ceramics – a practice that for millennia had been the domain of independent artisans working in small studios – evolved into a global industry.

But by the 1920s, the ubiquity of these adornments had dulled their appeal. Modernist ceramists such as Bernard Leach and later Austrian-born British potter Lucie Rie and German-born Hans Coper, who began as Rie’s assistant, advocated for expressive handmade vessels, a movement accelerated in the 1940s by nationwide restrictions, instituted to save resources for the war effort, on the decoration of mass-produced ceramics. Yet while the second half of the century saw a flowering of disparate styles, the craft remained uniform in Britain in one significant way: its practitioners – with notable exceptions like Rie, Clarice Cliff, Gillian Lowndes, Alison Britton and the famous Kenyan-born artist. Magdalene Odundo – were predominantly male and almost exclusively white.

In recent years, however, a new generation of black British potters – mostly women – have begun to breathe new life into ceramics. While their grandparents, many of whom immigrated to England in the 1950s, 1960s and 1970s from the Caribbean, West and Central Africa and elsewhere in Europe, might have viewed the arts as too exclusive or risked to pursue a career, these young creators are now redefining the medium through work that takes into account their own identity and, often, that of Britain.

IF THIS EMERGING COMMUNITY has a center, it’s artist Freya Bramble-Carter, 29, and her ceramicist father, Chris Bramble, 63, who teach classes at their studio in London’s bustling West Hampstead in an old Victorian factory. From the late 1980s to the early 1980s, Bramble – which made wheel-turned porcelain pots in earth-toned glazes and hand-carved stoneware vases with delicately drawn faces inspired by traditional Zimbabwean busts – remembers being one of the few black ceramic artists on the British scene. But he says that is changing now, as part of a larger generational shift. Among the talents he has cultivated is Ronaldo Wiltshire, 32, who recently starred in British TV series ‘The Great Pottery Throw Down’, and whose pieces include matte black vases finished with accents of blue and green reminiscent of the shores of his native Barbados. “I didn’t know of any other black ceramists in London until I met Chris,” says Wiltshire. “Now I’m happy to see more practice every year. I tell them that ceramics can be very healing.

Bramble-Carter, who identifies as mixed-race, also credits her lifelong interest in clay to spending time in her father’s studio. When she studied at Chelsea College of Arts in London, she was often frustrated by expectations of what her work should be: “The figures I made were lumped into ‘all this black art'”. around her and the development of her practice, she says, “I don’t care if the work contains blackness or whiteness.” Over the past seven years, her pieces – oversized plates with blue glazes variegated with rutile and striped stoneware amphorae in vivid Greek and Caribbean-influenced palettes that she sells in design stores 8 Holland Street and the New Craftsmen – resisted adhering to any style. The very amorphism of clay, she says, allows her to explore her multiple identities.

Similarly, London-based Spanish ceramicist Bisila Noha, 32, began experimenting with sculptural forms inspired by her interest in her Equatoguinean heritage and in ceramic traditions across Africa, supported primarily by women whose work has historically been ignored or minimized around the world. Canon of Western art. This “awakening of my blackness”, as she describes it, gave rise to a new body of work – including unglazed vessels in the shape of pregnant women’s bellies and squat two-legged vases resembling generous pairs of thighs. — made in part from clay his parents bought for on a trip to Baney, his father’s hometown in Equatorial Guinea. “In the same way that African pots are used in ceremonies to connect with ancestors,” she says, “making these pots out of Baney clay, and in some cases mixing it with porcelain and stoneware English Draycott, was a key moment in my journey to connect with my roots and my darkness.

Potter Isatu Hyde, 31, who works in a stone outbuilding on a 13th-century farmhouse in Shropshire, also cites a desire to connect with African ceramic traditions. “I want to sit with other women and make pots in a home and bring that back to the UK,” she says of her plans to visit Nigeria, Senegal, Ghana and Sierra Leone a once travel restrictions are lifted. While her gleaming stoneware cups and bowls are influenced by pre-industrial global ceramics, and her elegant red clay cookware (she recently shipped 20 of her domed-lid bread domes to the cafe and bakery Gjusta in Los Angeles) are inspired by European medieval pottery, she sees in her use of generous curves, long favored in West African art, the expression of her ancestry.

And then there’s Phoebe Collings-James, 33, a London-based multidisciplinary artist who has been making lap-thrown pots accented with abstract slipware designs and painted sgraffito marks since 2018 under the name Mudbelly. Among his recent works are a series of monumental wall hangings, each composed of dozens of glass tiles embellished with compositions of symbols and patterns that seem to communicate fractured excerpts from ancestral tales. A recurring figure is a thick-legged black spider inspired by Anansi, a character from West African storytelling traditions who entered Caribbean and African-American folklore during the transatlantic slave trade. Her story, which is defined by her creativity and her spirit, “represents a mode of being linked to survival and resistance under colonial rule and capitalism”, says Collings-James, and she found an echo in her as she explored her own Jamaican duo. -British identity. An exhibition featuring these pieces will open in September at the Camden Art Center in London. But before that, she plans to run a free eight-week ceramics course in east London led by black teachers, in hopes of enabling more young black artists to find their identity in the medium, as she did it. “The dominant history of clay in the UK may be white,” she says, “but that doesn’t reflect its broad cultural influences, the community that now exists or what working with clay can do for people. It’s about considering all facets of life – joy and sorrow, politics and violence. It is a form that ultimately helps us realize who we are.

How to break your creative block with ceramics and pottery