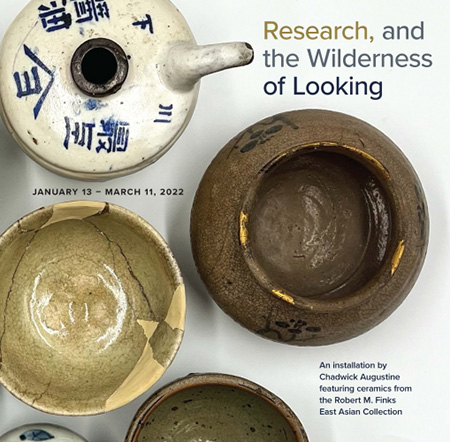 An installation that features selected pieces of Asian pottery collected by a former geology professor is on display at the Feigenbaum Center for Visual Arts.

“Research and the Desert of Research” runs until March 11 at the Crowell Gallery. It features works from the Robert M. Finks Collection of East Asian Ceramics, which is part of Union College’s permanent collection.

The installation was designed by Chadwick Augustine, an artist working in Brooklyn and upstate New York, using wood and other mixed media.

A dedicated scientist, mentor and teacher, Finks (1927-2014) was a research professor of geology at Union from 2003 to 2011. He previously taught paleontology at Queens College, City University of New York.

He specialized in researching and describing sponges from the early to middle Paleozoic, which inspired his affectionate nickname, “Sponge Bob”.

In addition to the 84 ceramic vessels he donated to the College in 2012, Finks reportedly had a large collection of fossil specimens and historical artifacts, and he was a published poet.

Augustine holds an MFA from the New York State College of Ceramics at Alfred University, and he has exhibited in the United States and internationally. Her work explores the lyrical web of materiality, landscape and the nature of objects to engage myth.

“Seeing that my practice borrows from the languages ​​of craftsmanship, mythology and the collage of sculptural forms, the invitation to work with the Finks collection felt like a natural pairing to deepen this exploration,” he said. declared.

Gathered into a collection, “these vessels have been given new context and meaning as prized possessions in the cabinet of Dr. Finks’ tirelessly inquisitive mind,” said Sheri Lullo, associate professor of visual arts. “It is here that Augustin enters to select from the multitude of possible dimensions, from historical to material to personal, that this composite collection could express.”

All exhibit visitors will be required to follow Union College’s mask and vaccination protocols. This means wearing surgical masks or N95, KN95 or KF94 indoors, regardless of vaccination status.

Those unable to attend can take a visual tour of the exhibit here.