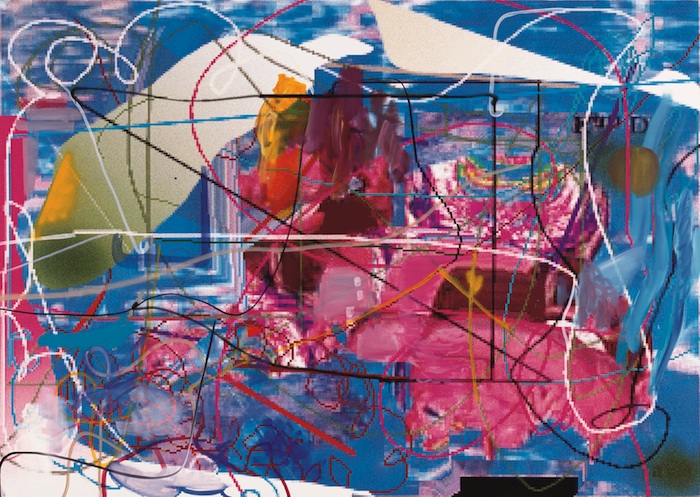 “None of the terms in painting really make sense to me,” artist Molly Zuckerman-Hartung said at the New Museum’s Contemporary Painting Symposium, held in honor of her current investigation of Albert Oehlen, on Saturday. “The painting has a lot of baggage. Terms like “zombie formalism” annoy me. At one point or another, the five other artist-panelists for the day agreed.

Zuckerman-Hartung was seated alongside Josh Smith and Mika Tajima on the first of two panels this afternoon. His subject was contemporary abstraction, which is a pretty abstract subject, the artists agreed. “The notion of abstraction is contradictory, actually,” said Tajima, who claimed to be a sculptor involved in painting. “If something is abstract, it is indescribable with language. And the idea of ​​painting itself is a ridiculous way of thinking about abstraction because if you materialize something or put it into language, you’re already doing something that’s not abstract. Works inspired by Tajima’s psychedelic office furniture deal with “the intersection of information, social space and history,” as she put it. She uses the cubicle surface to address these three topics, and she discussed her work in terms of economics.

Smith was a little more frank. When panelist Maria Lind, director of Testa Konsthall in Stockholm, asks him about the messy monochromes he shows at Luhring Augustine in New York two years ago, he kept it simple. “Well, actually imagine, say, a square about four feet high and five feet wide. Is it, like, a color or something? he said, and it left it there.

Zuckerman-Hartung said she came to abstract painting after studying literature and writing. She had a “discovery of a fervent belief” when she read Mondrian’s writings. “It has everything to do with this weird headspace that abstraction can produce,” she said. “It’s also a shared language.

“I don’t know if I’m on the right panel,” Smith said after Tajima and Zuckerman-Hartung exchanged ideas about gender, economics, and ethnicity in abstraction. “I don’t think you have to explain the abstraction at all,” he said. “In the last 30 to 40 minutes, I’ve thought about it more than ever. It’s just a matter of using your being to get in there for a second.

Zuckerman-Hartung was curious about Smith’s reaction, especially after Smith questioned whether abstraction and masculinity still had anything to do with each other, and the conversation turned tense. Ultimately, however, she and Smith agreed that abstraction is about something bigger than us. “It’s up to people to transcend what is available to them over the course of their lives,” Smith said.

After a half-hour break, Ken Okiishi, Florian Meisenberg and Kerstin Brätsch gathered to discuss digital abstraction. Okiishi began by presenting a Frieze project he carried out in 2013, in which a robot hurled paintballs at a glass surface and canvas when visitors pressed a button. (“I’m particularly allergic to the art fairs context, seeing all the people fucking each other,” he said as he released the video documentation for the project.)

Okiishi later explained that his art began with a joke: the grease left by fingerprints on screens is actually the result of abstract gestures. Anyone with an iPhone can become Pollock. But then, for Okiishi, it became something more – it became “generative,” as he put it, and he was able to use paint to blur the inside and outside of the screens. By painting on screens and then filming those painted screens, he was literally turning digital technology upside down – he was putting inside gestures that are normally done on screens.

Like Okiishi, Meisenberg combines analog and digital techniques for his paintings. For a show earlier this year at the Simone Subal gallery, Meisenberg did a 21-foot-long painting that involved giclee oil paint, prints of her buttocks, and flashcards. “My artistic approach is derived from painting,” Meisenberg said, “but I am constantly engaged in the digital realm.”

Meisenberg, who studied painting with Peter Doig, explained how technology has flooded us with images, creating what he called a “meaningful jet lag.” In response, a video from this Simone Subal exhibition featured an amorphous digital drop engulfing and regurgitating sculptures, furniture and other objects.

The ability of digital technology to overlay images returned when Brätsch discussed the relationship between language and painting. Brätsch said she suffered from “abstract anxiety” and wanted to move away from it as a first step. ” Break [abstraction], I have to drop it, so to drop it I have to drop a drop of paint, ”she said. This resulted in his digitally designed geode-like shapes, which feature swirling shapes that appear to be layered. The goal, she said, was to get people talking – to evoke the accumulation of history in these images, which are reminiscent of both Renaissance marble sculptures and cracked computer screens. . It was, as Brätsch said, “painting like stirring the pot”.

When the panel’s moderator, media theorist Alexander Galloway, asked if there was anything spiritual about his footage, Brätsch paused for a moment and thought about it. “It’s a bit difficult to describe with language,” she concluded.

Okiishi was simpler: there is no spiritual content in his work. “Maybe it’s just ‘Oh I’m working on something’,” he said of his process. Then, when a member of the audience asked a particularly complex question about the definition of “digital” versus painting, Okiishi noticed that it was a more complicated subject than he initially had. think. Realizing that the conversation was drifting away from its original topic, Okiishi said, “I think it’s interesting that we’ve been asked here to talk about digital painting and all have stepped down to talk about something else. . “

“I wonder what Oehlen would say,” Brätsch replied.

“The Forever Now”, a survey of contemporary painting at MoMA