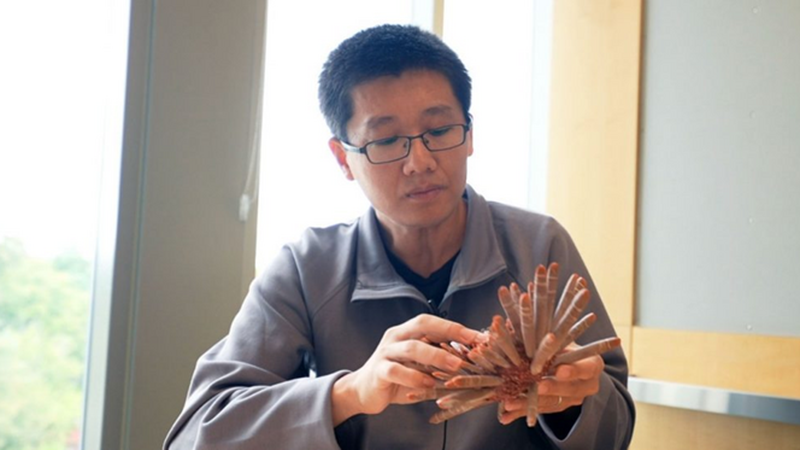 Solving a “mystery” in the porous microstructures of sea urchin exoskeletons could lead to the creation of lightweight synthetic ceramics, researchers have said.

The work, which could eventually have applications in supersonic aircraft, was led by Ling Li, an assistant professor in the mechanical engineering department at Virginia Tech.

Ceramic is highly heat resistant, making it a preferred choice for handling the brutal thermal demands of aircraft traveling faster than the speed of sound. At these speeds, the compressed air creates significant friction against the vehicle, which causes a rapid increase in temperature.

However, the materials are susceptible to damage – a single point impact in a ceramic plate can lead to a rapid crack propagation that causes total structural failure. Ceramic becomes even less tolerant of damage when made porous to reduce weight, but weight reduction is an essential requirement for many structural applications, including in high-speed vehicles.

The US Air Force, one of the sponsors of Li’s research, has long been interested in improving the mechanical performance of ceramic materials.

Li and his colleagues sought to find new design principles from the natural ceramic cellular solids formed by organisms such as sea urchins. A sea urchin’s exoskeleton has a “foam” microstructure with an assembly of open cells with solid edges or faces, and spaces between them make the material porous and more mechanically efficient than dense structures.

“In this work, we believe we have found some of the key strategies that allow the sea urchin to be strong and resilient while providing weight reduction through its porous microstructure,” Li said.

Sea urchin spines are stiff, strong and light. They are made of a fragile mineral called calcium carbonate, which is similar to synthetic ceramic, but the creature has a much higher tolerance for damage when given weight or force.

The team tested this principle by mechanically pressing down on the spines, simulating the same type of condition an engineered ceramic might have to endure. The sea urchin spines deformed gracefully under the force, unlike the catastrophic failure of synthetic ceramic cellular solids. This “graceful failure” allows sea urchin spines to resist damage with significant energy absorption capacity.

“There are some secrets in the structural characteristics of sea urchin spines. One is related to branch connection,” Li said. “The second is pore size.”

The researchers observed an architecture of interconnected short branches under a microscope. A network of nodes holds these branches together, and one of the secrets of the sea urchin’s damage tolerance is the balance between the number of nodes and branches.

“This number is critical because nodes with too many connected branches will make the structure more fragile and breakable,” said a research announcement. “The nodes of the porous structure of sea urchin spines are connected with three branches on average, meaning that the network of branches will experience bending-induced fracture instead of the more catastrophic stretch-induced fracture.”

The second secret lies in the size of the pores between the branches. The team found that the gaps in the porous structure of sea urchin spines are just slightly smaller than the size of the branches, meaning the branches can be “locked” in place after they fracture. The broken branches pile on top of each other over the pores, creating a dense region that is still able to support the load.

Sea urchins also have a different surface morphology from synthetic ceramics. Manufactured cellular ceramics have microscopic defects on their surfaces and interiors, making them more susceptible to failure, but sea urchin spines have an almost glassy surface, smooth down to the nanometer scale.

Despite the desirable characteristics, recreating these characteristics in synthetic ceramic is not yet possible with current manufacturing methods, the researchers said. They are usually formed in two steps – first creating their shape, then firing the piece to harden and gain strength. However, this sintering process also leads to the formation of microscopic defects.

“In my lab, we are also interested in how organisms such as sea urchins form these natural ceramic cellular solids,” Li said. materials to bio-inspired lightweight ceramic materials, but also material processing strategies learned from natural systems.”

The team also received funding from the US National Science Foundation.

The book was published in Nature Communication.

Content published by Professional Engineering does not necessarily represent the views of the Institution of Mechanical Engineers.