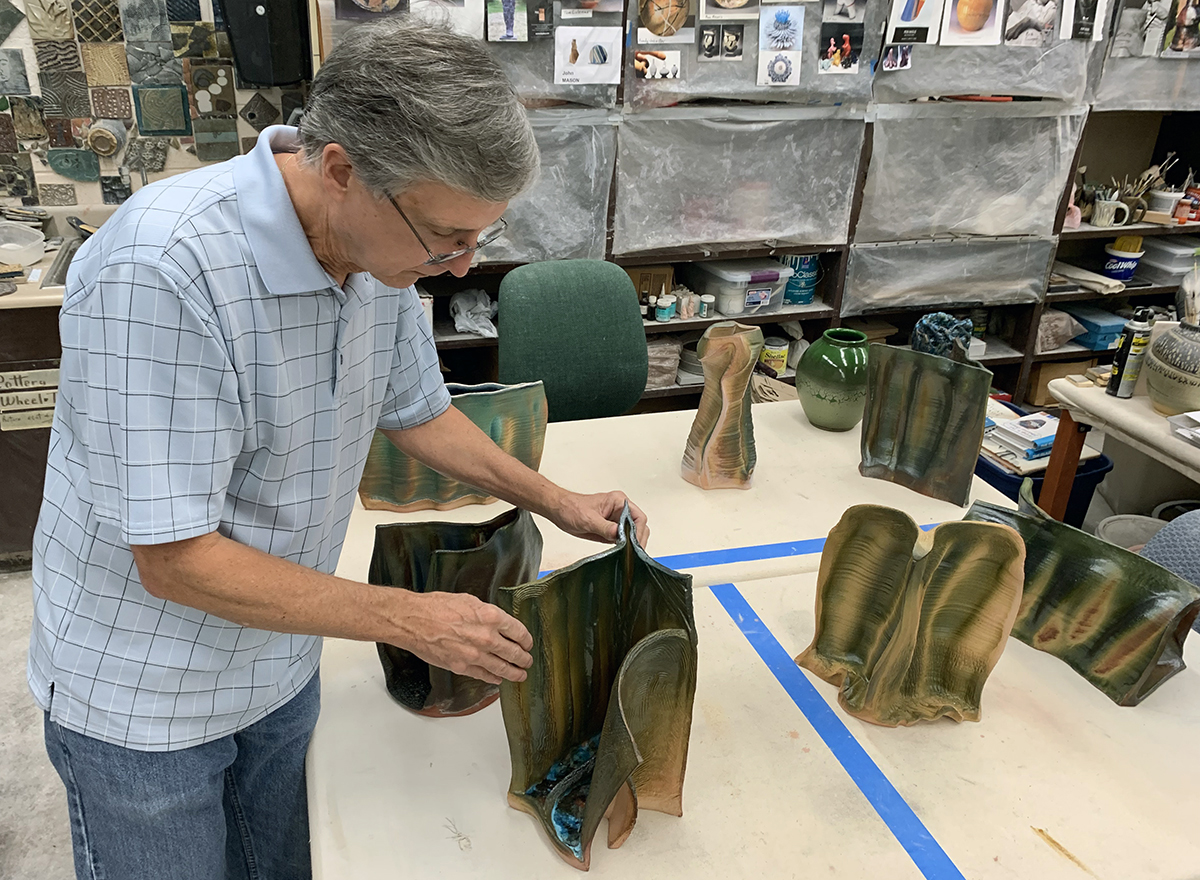 Linnis Blanton’s latest works literally turned his creative process upside down. The ceramist from Beaumont drew on his Native American heritage to transform his pots into sculptural landscapes that are both intimate and epic.

One day Blanton said he was working on the wheel of the pot, pushing from the outside to twist the wet clay and create his signature organic shapes, when his friend and local sculptor David Cargill looked inside and asked. said: “It’s better inside. ”

“What blew my mind was that I knew it, I was always aware of it,” Blanton said. “But to hear David say it, it’s like, ‘Whoa!’ So, I flipped my pots upside down, and that freed me to reconnect with sculpture instead of pottery. I’m not ashamed of pottery at all, but it’s like making a no more, and it was so exciting.

The upside-down carvings resemble deep canyon walls, like those found in the West. Blanton, who has Cherokee and Osage ancestry, said during a visit to Ancestral Pueblo Ruins in the Four Corners area, he found a similarity in the markings on the canyon walls and the markings on his sculptures.

“It’s a kind of thread that goes to the clay that runs through my body, my soul and my spirit and connects it to my work,” he said.

The Ancestral Pueblo was previously known as Anasazi. However, the term is now largely unused as the word is of Navajo origin and means “former enemy”.

The Beaumont Art League will host “Sacred Silence: The Artistic Vision of Linnis Blanton,” which opens with a free reception, 7-9 p.m., November 13. The exhibition will be on display until December 17. The title reflects what Blanton strives for when he works.

“I find that stillness within me and it becomes a meditation,” he said. “You go off into that daydream state, and then the real work begins. I like silence. It’s my favorite sound.

Blanton has been working with clay for almost 50 years. He developed a clay program at a college where he taught for 30 years, and he taught at Lamar University for nearly 20 years. The Art League show is its second in just over a year, but few have seen the last as COVID shut it down. Despite his longevity, Blanton has the enthusiasm of a young artist who has just begun a journey of discovery. He’ll spend 15-20 minutes tossing the pot, then three weeks figuring out where the sculpture should go. Part of that allows for the unexpected.

“A mistake is a great opportunity to do something I’ve never done before,” he said.

“Sacred Silence” isn’t just a revamp of his previous show, as his new work demands a different look.

“This new is what’s exciting – it’s what makes it interesting, what motivates me,” he said. “I can’t wait to do it.”

In addition to the canyons, other shapes are revealed in the work, with recurring bird shapes that remind him of Native American thunderbird myths, Blanton said. He uses iron oxide and raku glazes, but the pieces are not fired with raku, but with oxidation, which affects the reaction of the glazes. Ferric oxide has a red tint, which Blanton often contrasts with greens. He works on a wheel – constantly turning parts and working from all sides.

As clay goes through the cycle of creativity, it changes shape, Blanton said. When first worked, the clay is wet, which he says is the state that all ceramicists love the most. Then the clay dries and becomes brittle before being fired.

“They lose their lives when they dry out,” he said. “They succeed when they come to life again.”

Blanton looks like a man who knows his place in the world. His world is clay and he needs nothing else.

“I feel sorry for the people who never find it, never figure out what their niche in life is,” he said. “I feel so lucky to have found something that I can really connect with – and that’s just the feeling of clay. When I make marks on clay, it’s like a comfortable feeling, I know I’m doing the right thing. That’s what I’m supposed to do.

Baked pottery can last forever. Inside it will last forever, outside maybe a million years, Blanton said. This permanence gives him a sense of immortality.

“I really want my pieces to have a life of their own, because I won’t be here,” he said. “They will stay here much longer than me. I wish they were heirlooms passed down from generation to generation.

“You know, you hit it off when you hit the garage sales. I think that’s a compliment, because it’s like older generations are giving it up and newer generations are getting rid of it. And hopefully someone will see it and want to hang on to it, you know?”

“In a thousand years someone might get it back and they don’t know who you are. But maybe it’s possible, if it’s been in the family even for 100 years, you feel like a friend of the family. ‘Oh, yeah, there was this guy, he was the head of the art department at Lamar – all this mythology built around you that has elements of truth in it. But that’s the art, just telling us a story.

When Blanton works with clay, he tries to be in the moment. Yet he is also keenly aware of how these moments form a narrative that connects past, present and future. With that in mind, he prides himself on doing everything the best he can.

“I don’t want a bad track to come out,” he said. “I always do something again if I’m not satisfied with it.

Blanton has no intention of changing what he does. After almost half a century, he knows exactly what he wants. Or rather what he does not want.

“One thing I don’t want to do is live an average life,” he said.

Andy Coughlan is a freelance writer for The Beaumont Enterprise.