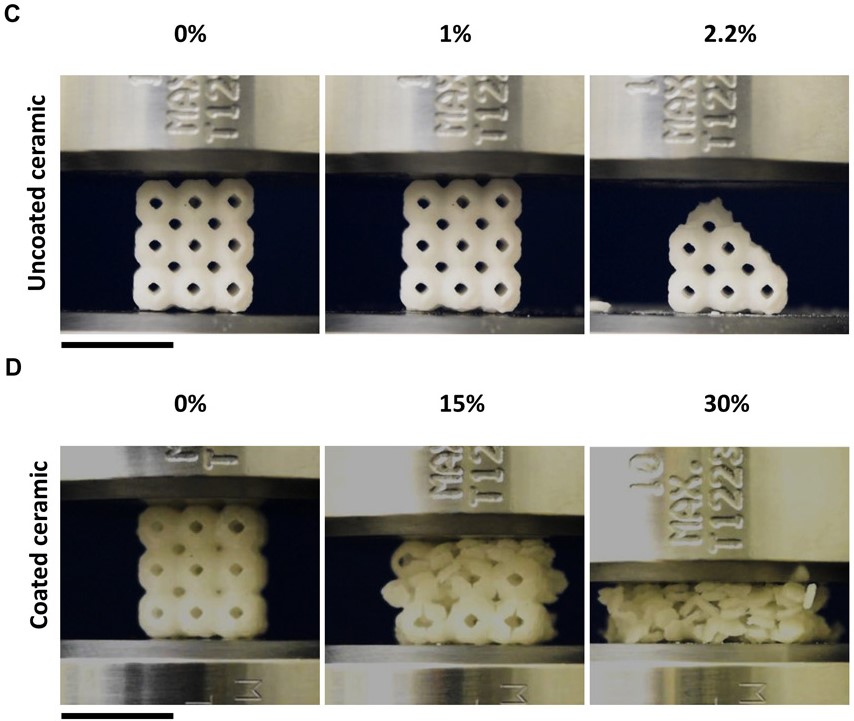 Researchers from Rice University’s Brown School of Engineering have shown that 3D-printed ceramic structures can be strengthened to be up to 4.5 times more chip-resistant simply by coating them with a thin polymer shell .

The structures in question include schwarzites, special lattices that exhibit “negative Gaussian curves” that give them extremely high strength-to-weight ratios. They were nearly impossible to manufacture until now due to their complexity, but with 3D printing now on the cards, the team believe the structures could have many applications in everything from buildings and bone implants to prosthetics. carriers.

Muhammad Rahman, materials scientist at Rice University and co-author of the study, added, “I’m pretty sure that if we can topologically optimize these structures, they also hold great promise for use as bio-scaffolds.”

Ceramics and the problem of fragility

Ceramic materials are often defined by their resistance to heat and chemicals, excellent strength and hardness, and low conductivity. They are also remarkably biocompatible, making them ideal for biomedical applications such as bone substitutes, dental parts, and even tissue engineering scaffolds. Unfortunately, ceramic also tends to be quite fragile. This means that they are prone to cracking and fracturing when subjected to high compressive loads, which limits their use in heavy-duty structural applications.

In nature, hard ceramic-based structures solve the problem of brittleness by infusing soft organic materials into the mix. We see it in mollusc shells, which are composed of thin, brick-like platelets of aragonite (95%) bound by soft biopolymers (5%). We also see it in the bones of many animals, where hard mineral nanocrystals are arranged alongside collagen fibrils, forming more durable matrices.

Inspired by nature’s proven work, the Rice team 3D printed ceramic schwarzites on a Formlabs SLA system and coated them with a thin, flexible epoxy polymer before further curing the parts under UV light.

In the uncoated control group, the structures were found to be extremely fragile, breaking as expected during drop tests and compression hydraulic press tests. In coated samples, a polymer coating 100 microns thick was enough to give parts up to 4.5 times more resistance to catastrophic fracture. Even when pushed to the point of breaking, the coated structures did not fully explode, instead crumbling and flattening.

“We clearly saw that uncoated structures are very fragile,” Rahman said. “But when we put the coated structures under compression, they will carry the load until they break completely. And oddly enough, even then they don’t completely shatter into pieces. They stay enclosed like laminated glass.

Additionally, compared to solid coated ceramic materials, 3D-printed schwarzite porous networks have been determined to be inherently stronger. This was attributed to the mechanism by which the polymer coatings infused into the porous structures, “filling” the pores to improve density and mechanical strength.

“Architecture definitely has a role to play,” says Seyed Mohammad Sajadi, lead author of the study. “We saw that if we coated a solid structure, the effect of the polymer was not as effective as with schwarzite.”

Further details on the study can be found in the article titled “Damage-tolerant 3D printed ceramics via conformal coating”. It is co-authored by Muhammad Rahman, Seyed Mohammad Sajadi et al.

Ceramic 3D printing has applications in all sorts of fields and industries. Earlier this year, researchers from Shenzhen University and the Southwestern Institute of Physics developed a way to additively manufacture ceramic structures that emit nuclear reactor fuel. Using lithium-charged ceramics and DLP 3D printing, the team was able to create “reproduction blankets” that autonomously generate tritium, a vital element in the nuclear fusion process.

Elsewhere in the medical field, scientists at the Skolovo Institute of Science and Technology have previously developed a new method for 3D printing custom ceramic bone implants. Specifically, the team deployed a simulation-based approach to create flexible, flawless 3D models that could be used to print porous implants.

Applications for the 2021 3D Printing Industry Awards are now open, have your say on who’s leading the industry now.

Looking for a career in additive manufacturing? Visit 3D printing works for a selection of roles in the industry.

How to beautifully repair ceramics with the Japanese art of Kintsugi