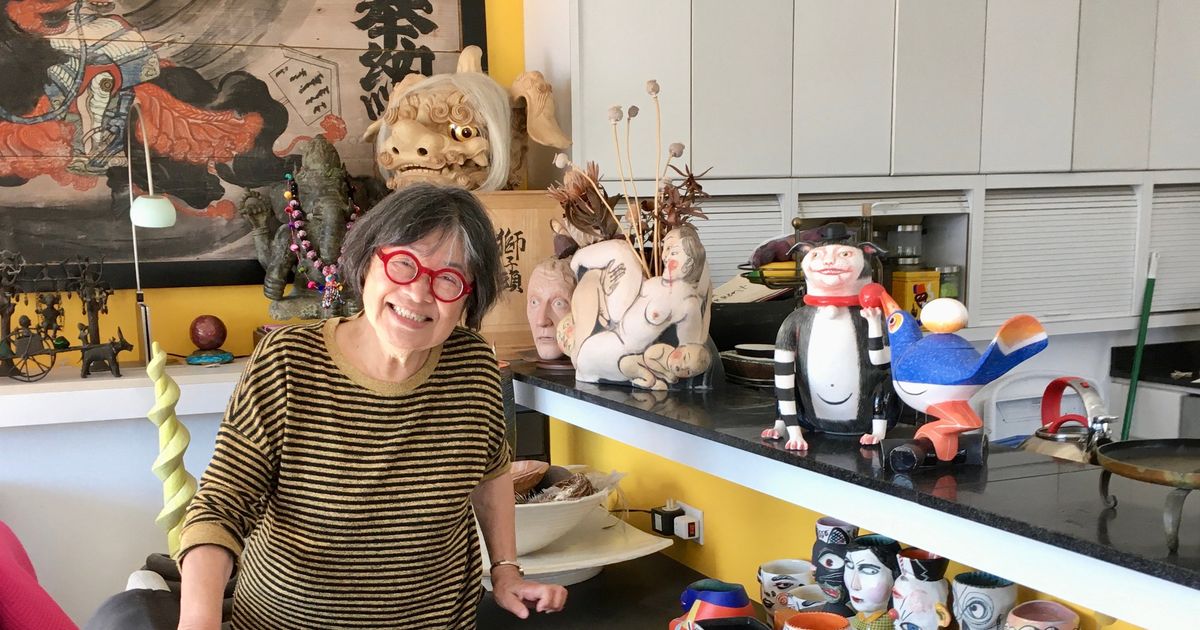 Masae ‘Patti’ Warashina, 82, is ‘the queen of northwest ceramics’

As a teenager growing up in Spokane, Masae “Patti” Warashina was focused on her studies and getting out of town. She never dreamed of gaining international fame as “the ceramic queen of the northwest”.

Nor did Warashina, 82, imagine that more than 60 years after leaving Spokane, the Smithsonian would honor him with the 2020 Visionary Artist Award for “having reached the pinnacle of sculptural art and design. “.

It has been almost two decades since Warashina last held a show in her own hometown. Mainly because “almost everyone I knew in Spokane is dead,” she noted with a laugh.

Despite the lack of familiar faces, the groundbreaking ceramicist, whose work is in the permanent collections of museums around the world, will return to her birthplace this first Friday with a solo exhibition at Marmot Art Space at Kendall Yards. The white box gallery will host a small retrospective of Warashina’s works, and the artist plans to be there from 5-8 p.m. to greet patrons.

Warashina has no plans to visit her childhood home in Spokane. “My brother told me not to go through our old house. It’s a disappointment,” Warashina said. “They didn’t take care of the yard.” Warashina’s mother inspired young Patti with her ingenuity and artistry around the house, especially when it came to their oversized property near Franklin Park.

Although her mother was raised and educated in Tacoma, she used Japanese methods of tying down branches and shrubs to turn their expansive garden into an amazing array of topiary. “The job site was really fantastic,” Warashina said with a sigh.

Perhaps even more amazing than her mother’s creativity was her resilience. During World War II, when Warashina was still a young child, her entire family was traumatized when her father, a local Spokane dentist and community leader, was investigated by the FBI, whom their bank account had been frozen and their home had been searched for subversive material.

All American citizens of Japanese descent lived under the threat of incarceration in concentration camps by their own government during World War II. “There was a lot of suspicion,” Warashina said.

Another heartache came when Warashina’s father died of stomach cancer when she was just 11 years old. She watched her mother take jobs to support the family, modeling the strong work ethic and fierce independence that Warashina would embrace in her own life.

It was science, not art, that became Warashina’s focus during her high school years at Lewis and Clark, and her sights were set on the University of Washington in Seattle. Already veering into non-traditional territory for a woman in the 1950s, Warashina’s Japanese heritage meant she had other hurdles to contend with.

“It was definitely a predominantly white culture in Spokane,” she said. “One of the reasons I went to Lewis and Clark was that there was a larger Japanese community in that central area than in my neighborhood school (of Rogers High).”

With her signature ambition and forward movement in all areas, Warashina said she “got what I needed” from high school and soon moved to Seattle, where the ocean and vegetation had captivated.

She had to take electives at UW and chose to enroll in a drawing class even though she “didn’t know what a charcoal stick was.” After peeking through the open door of a ceramics studio one day, Warashina got her first glimpse of the rest of her life.

“Once I reached that course, it was over,” Warashina said. “There was something about the material that I really liked. It changed my life. Warashina threw herself into the studio like clay on a potter’s wheel, imbibing the teachings of some of the most influential figures in Northwest ceramics and sculpture. She quickly became a pioneer in her own right.

Even before she had earned her master’s degree in 1964, she held her first exhibition with her first husband, fellow graduate student ceramicist Fred Bauer, at Seattle Center’s Northwest Craft Center.

His art continued to evolve over the years, from functional stoneware vessels and pots to humorous vignettes and figures. In 1965 she was included in the 10th International Ceramics Invitational Exhibition at the Smithsonian and the Craftsmen USA ’66 exhibition at the Museum of Contemporary Crafts in New York.

Her sculptures in the late 1960s with huge lips propelled her into the nascent pop art movement. His colorful “Ketchup Kiss” and “Unchilled Lips” sculptures were as trippy as rock and roll posters.

“I was not trained at school in the human figure at all because it was not fashionable. It was all about abstract expressionism back then,” Warashina said. “But I started using parts of the figure to model, like doing a giant lip.”

Abstract Expressionism may have been all the rage, but Warashina’s flirtation with the human figure continued to grow. “The Abstract Expressionist movement usually meant using large brush strokes or attacking the material, in all of this powerful and brutal, very gestural movement,” Warashina explained. “All my clay work just started to tighten up (instead).”

“So getting into the numbers was very slow…and I had to get on with it,” Warashina said. “I ended up working in car manufacturing myself, which gave me a lot of confidence to fuel up.”

Warashina became a prominent artist in the West Coast Funk Art movement of the 1960s and 1970s, and other ceramic artists took notice. In 1970, legendary entertainer Robert Sperry hired Warashina to return to teach at UW, and in 1976 they were married.

She taught at her alma mater for 25 years until she retired to care for Sperry, who died of bone cancer in 1998. Both ceramists brought fame and influence to the ceramics department of university through their innovations.

Warashina’s figures have become her trademark and her sculptures mostly feature female nudes in joyful or mischievous poses, or surreal and/or humorous situations. Meanings or social commentary vary from piece to piece – sometimes political, sometimes personal, often feminist or subversive in nature.

Whatever the meaning, Warashina women rarely fail to delight or excite curiosity. Warashina said she will be bringing a variety of pieces from Spokane’s past years from her home in Seattle. At the Marmot Art Space you will find bronzes of female figures, birds, several prints and two “cat boxes”.

Cats and birds are “covered”, which means that their heads stick out. “I don’t really know why I’m doing this. I think sometimes my utilitarian period comes out,” laughed Warashina. “I like being able to move my head back and forth if I need to in a room.”

As for her more subversive pieces, Warashina challenges this common understanding of her art. “I think I’m cynical, but I don’t think I’m subversive,” she said. “I just don’t think life is a big happy thing. I just believe that to get through life, you have to be able to laugh.