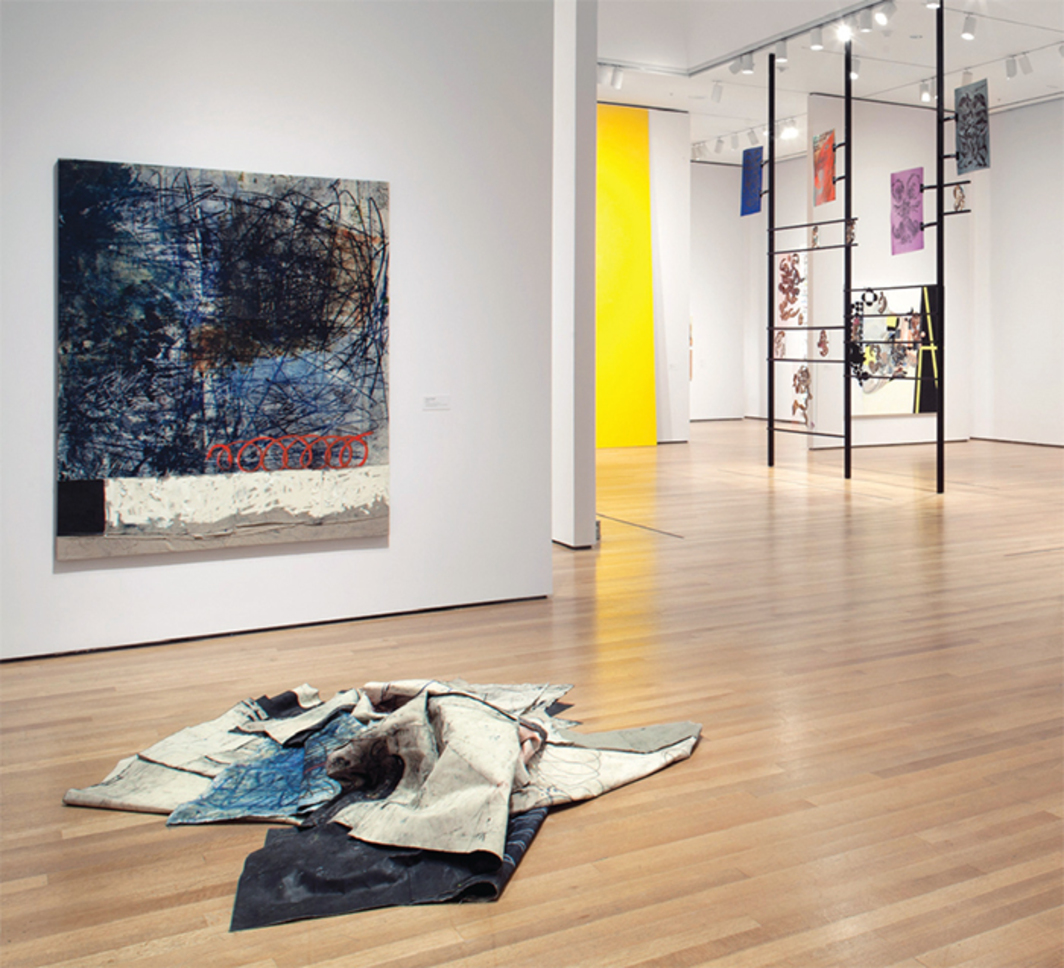 Lloyd Wise on “The Forever Now: Contemporary Painting in a Timeless World”

THE PAST IS NEVER DEAD– it’s only a click away. And the artists of “The Forever Now: Contemporary Painting in an Atemporal World” immerse themselves in a networked, GIFed-up story that is as accessible to promiscuity as it is to the screen. Contemporary culture, argues the exhibition’s curator, Laura Hoptman, is defined by the compulsion to synthesize disparate historical tropes. Therefore, for artists today, movements such as AbEx, Minimalism, Constructivism, Fauvism and De Stijl are no longer milestones in the teleological progression of modernism, but tools in a bar tools or colors in a palette. The operative approach is that of a “connoisseur of unlimited information,” according to his catalog essay, “a selection of items from the past to solve a problem or task at hand.

This is presented as a good thing – and it very well may be. Yet the prerequisites for such art have a dark side: the notion of timelessness at play here, borrowed from the work of science fiction writer William Gibson, is linked to a state of uncertainty and risk. . Gibson explored the idea in his post-9/11 paranoid novel Pattern recognition (2003), in which the heroine, Cayce Pollard, works freelance as a “coolhunter”, with an uncanny ability to guess what will happen in a volatile, recombined consumer culture where novelty is no guarantee from What’s Next. “Fully imagined cultural futures were the luxury of another day, a day when the ‘now’ was of longer duration,” says Pollard client Hubertus Bigend. “Things can change so abruptly, so violently, so profoundly, that futures like our grandparents don’t have enough ‘nows’ to hold on to.” Timeless painting is thus as much a happy outcome of the deconstruction of modernist myths of progress at the end of the 20th century as it is a by-product of the real conditions of our panicked and hyperconnected present. The aesthetics of the precarious age are inevitably marked by a reluctance to dream of the future and a concomitant desire to frantically recycle the past.

Precisely how timelessness differs from theories of postmodernism (and related pictorial styles) is one of the first questions raised by the premise of this exhibition, and Hoptman, in his essay, goes to great lengths to distinguish the seventeen artists of the exhibition from the handymen of the past. Indeed, the art on display offers little of the smug irony and deft sensationalism of, say, the International With Monument stable; but the decade of junk bonds and neo-geo heralded more than the death of the author, of course, just as the artists of Pictures weren’t the only ones called po-mo. Sometimes the timeless can even come across as a more inclusive version of neo-expressionism. At the beginning, that of Nicole Eisenman whatever the guy2009; capitalist guy, 2011; and Runner Guy, 2011, seem to make fun of this same movement; these bushy, pale portraits scalloped with photos of African statuary surely have fun at the expense of the grandiose duality of a Julian Schnabel or a Sandro Chia in parodying these artists’ cynical appropriation of mid-century ideals of subjectivity unbridled artistry and primitivist immediacy. Yet it’s hard to deny that this appropriation of appropriation, this parody of pastiche, might seem a little tenuous, a little stress, or that the fragile edifice of second-order irony is in danger of collapsing into another simulacrum variant of the thing itself. Writing about the Neo-Expressionists in 1981, artist-critic Thomas Lawson sounds as if he could discuss the artists here: “Appropriation becomes ceremonial, an accommodation in which collage is not understood as a disruptive agent. . . but as a machine to promote unlimited growth. For Lawson, however, this unlimited growth was bad.

Yet, as “The Forever Now” makes abundantly clear, the endless proliferations of our anxiety-laden moment have produced many powerful works that go beyond the pictorial cul-de-sacs of the less than zero generation, with highlights ranging from the explosively dark abstractions of Michaela Eichwald to the atavistic glyphs of Joe Bradley. And if the resurrection of the sculptural deconstruction of 1960s “painting” is a checkbox, it’s hard to imagine anyone more perfect to fill it than Dianna Molzan. The Los Angeles-based artist’s kiss sense, coruscated color and calibrated shyness give shape to blinking puzzles of desire, reanimating Manzoni and Ryman’s finales to eerie, mysterious effect.

If one artist is representative of the exhibition, it is Josh Smith, who produces paintings in a wide range of art historical styles at a dizzying pace, sparking a hierarchical whirlwind of sheer, multifaceted production. As manifested in Smith’s practice, it is compelling – both emulating and infiltrating the visual glut of our moment. Yet, as a curatorial model, it has its pitfalls. “The Forever Now” is scattered, its deliberate inclusion resulting in dynamism but also incoherence. The artists are each represented by a small handful of works, arranged like so many art fair stands. One senses that the intention was to include the widest range of practices possible, and a clear narrative thread has been lost; the show seems to struggle to capture the elusive coolness. She thus points to a familiar difficulty: that of establishing aesthetic criteria in the era of cultural pluralism – a problem, it is, at the heart of Pattern recognition.

“The ‘cool’ part – and I don’t know why this archaic usage has remained, by the way – is not an inherent quality,” Pollard explains to a Russian “viral advertiser” named Magda. “It’s a pattern of group behavior around a particular class of objects. . . . I try to recognize a pattern before anyone else. But as Gibson’s novel teaches us, such patterns can also be illusions, hallucinated cues in noise. Better to hedge your bets; better bring everyone to the party, because you can’t know who will be the next trend. “We have no future because our present is too volatile,” says Bigend. “We only have risk management.”

“The Forever Now: Contemporary Painting in an Atemporal World” is on view until April 5.

Crafting animal skins and weapons in ‘Far Cry 5’: what’s different this time around?