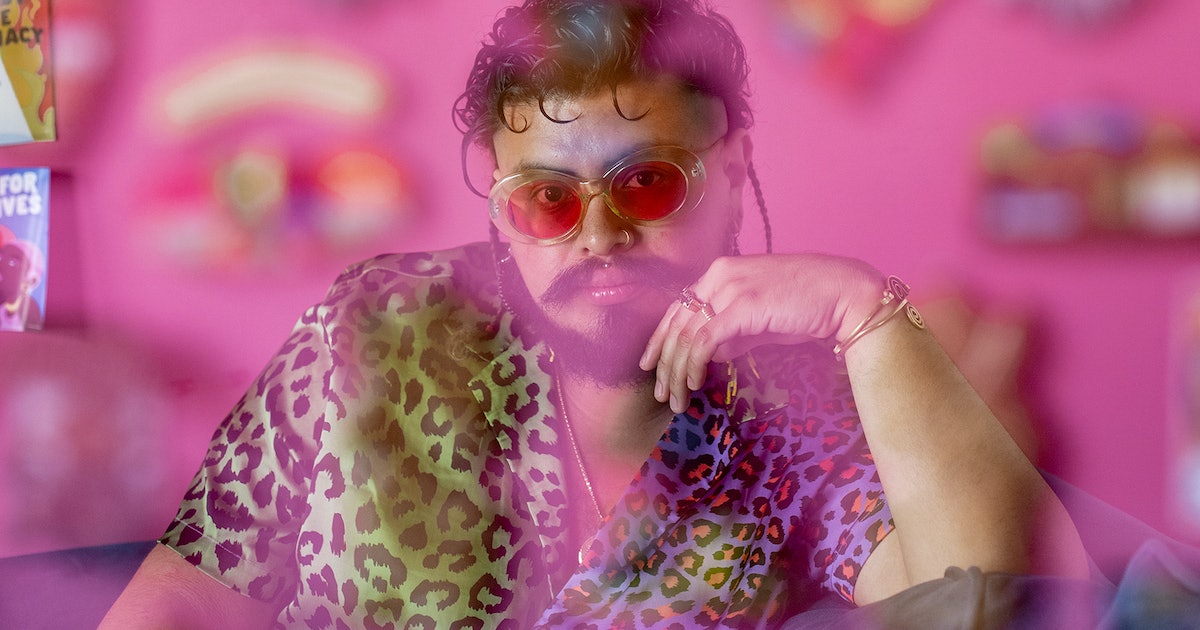 Amidst a maze of white walls at the New Art Dealers Alliance fair during Miami Art Week in December 2021, there was a pink booth that caught my eye. The brightly colored exhibit titled “La Pulperia Doña Pina”, belonged to ceramist Joel Gaitan, with Miami-based gallery KDR305. His installation was decorated with a banana tree stalk, a terracotta tiled roof, and shelves of colorful Central American snacks and condiments, all surrounding a selection of terracotta sculptures that simultaneously paid homage, challenged and developed the history of Mesoamerica. ceramic. (His exhibit was part of a special selection made by Ebony L. Haynes of 52 Walker to showcase at NADA Miami and highlight emerging artists.) I met Gaitan, 26, later that month at Little Havana, Miami, near his home. With dyed chartreuse hair and matching chartreuse sunglasses, he was as energetic, playful and inquisitive as his sculptures had appeared to me weeks before.

Born in Hialeah, Florida to Nicaraguan parents, Gaitan remembers always being drawn to clay. “When I was in church as a kid, they said, ‘Pray to God for whatever you want.’ I always wanted Play-Doh,” he said. “And I got my Play-Doh every Sunday.” He attributes his interest in art to his ancestral heritage and family line, dating back to his grandfather, who was a musician and painter. His ancestry and the indigenous history of Nicaragua are two central themes in Gaitan’s work: he creates pieces using traditional hand-making techniques, and “La Pulperia Doña Pina” is named after his aunt, Doña Pina, who runs a pulperia (a store similar to a cellar which sells food and drink) in Managua, Nicaragua.

“The art has always been there. We all have it. It’s just that certain things wake him up,” Gaitan said. “And for me, the church woke him up. Knowing my grandfather and my family in Nicaragua woke him up. The story of my parents, their migration here, woke him up. My work is extremely spiritual. It’s a way to get our people back and get back to our people. To pay homage to them. […] I believe that when I work, I am guided by spirits. That’s why I don’t need inspiration to start with a ball of clay. I just started and of ahi, I am not afraid of what comes out because I know that I will be guided.

The spiritual nature of Gaitan’s works shines through especially when it comes to the history of Mesoamerican pottery and its connection to indigenous spiritual practices. Pieces like “La Mayahuel” and “Venus de Managua” evoke sculptures of Aztec deities like Tlazolteotl, the goddess of childbirth and purification, who is often depicted in a frontal childbirth position with a human head between her legs. (Depictions of Tlazolteotl have been featured in works like Diego Rivera’s “The History of Medicine in Mexico: The People’s Demand for Better Health,” and were referenced by Steven Spielberg in his film “Raiders of the ‘lost ark’).

His involvement with NADA Miami and KDR305 sheds a deserved light on his work – he even picked up another show, titled “Lágrimas de Oro,” which opens March 26 at 56 Henry Gallery in New York. “Her work is like looking at museum artifacts in a new way,” KDR305 founder and director Katia Rosenthal said of Gaitan’s ceramic sculptures. “I instantly thought that his work could be put behind glass cases in a museum like The Met. It’s so interesting that someone so young is still making connections to the past, staying true to their culture, and staying true to himself.

When asked how he sees his work evolving next, Gaitan said he wants to explore larger scales and bring different stories to his pots. “I’m not into simple display, I’m into heavy storytelling,” he added. “I like to take up space and I like to represent the unrepresented.” The stories he seeks to tell come specifically from the many countries that make up Latin America, although we both agree that using the term “Latin” does a disservice to the huge diaspora of cultures that exists in Central America, South America and the Caribbean. ; including those that existed long before their colonial and Latin domination.

“My thing is, we’re stuck in this Latinidad box, but in reality, we’re so different from each other. And that’s no offense to anyone who comfortably identifies as Latina (a/ o/x). It’s a comforting term because people often don’t care about learning about different cultures,” Gaitan said. “My goal is to get out of this Latindad culture. I am Nika. And I want you to learn what that means. You will eat my food. You will learn to pronounce [things] law. I want our food and arts to be considered high end. We’re as high end as they come.”