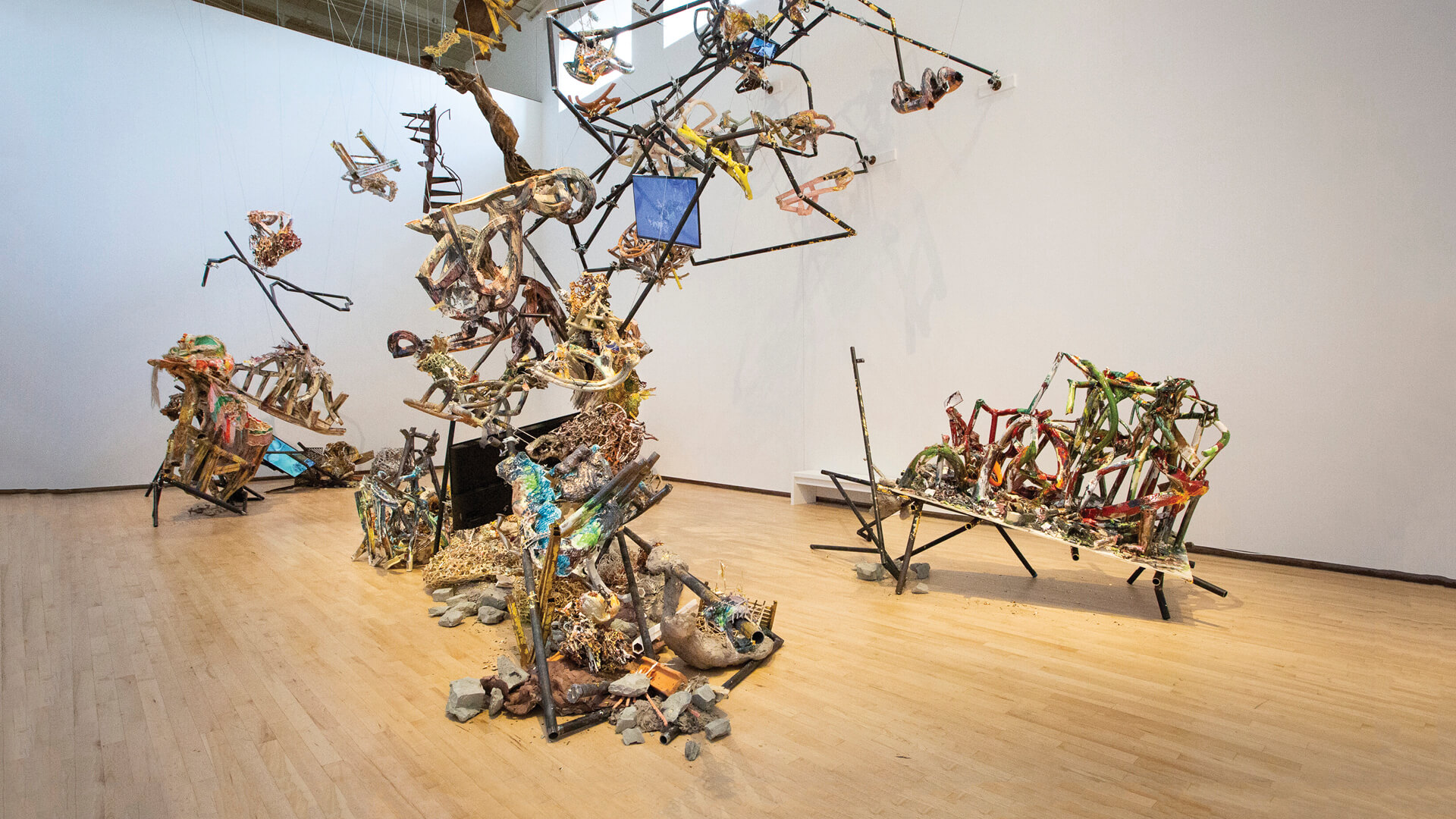 ‘Ceramics in the Expanded Field’ resurrects appreciation for clay and ceramics

Clay as the oldest medium has been used frequently by contemporary artists to create works of art. The excavation of archaeological sites has witnessed rarely found artifacts made of clay to hint at the cultural past of human life. With the rise of new media arts, conventional mediums such as clay have been relegated to the fringes of contemporary arts. Until recently, artists shared their renewed interest in ceramics with their creations to put it back in the spotlight to trace its malleability. The exhibition Ceramics in the expanded field at MASS MoCA, Massachusetts, provides an overview of works created with clay by artists of different generations as well as from different disciplinary backgrounds. The exhibition features the work of eight artists, including Nicole Cherubini, Armando Guadalupe Cortés, Francesca DiMattio, Jessica Jackson Hutchins, Kahlil Robert Irving, Anina Major, Rose B Simpson and Linda Sormin. Participating artists use clay as a material and integrate it into ceramic work with photography, video, painting, sculpture and performance.

The scale of the exhibition in the expansive galleries of MASS MoCA highlights how artists have experimented with material to create large-scale installations. Along with this, the vessel and figure synonymous with ceramic art are displayed to remind viewers of the daily presence of clay in many forms in our lives. The exhibition highlights the many stories in which each of the participating artists immerse themselves in order to initiate multifocal engagement not with each other, but also with the viewers. The curator of the exhibition, Susan Cross, in an interview with STIR, talks about the strengths and individuality of each artist as well as a number of concerns and common characteristics: “I started with a long list of artists in what is a diverse medium and exciting field, and ultimately chose the eight in the exhibit. They each integrate their clay work with other mediums or have a practice that includes multiple disciplines that inform and influence each other and ceramic work. They also all turn to the cultural and socio-political stories (from colonialism to capitalism) embedded in the material (and its segregation) while using it as a vehicle to change culture.

She adds, “Ultimately, the threads that connect the artists are conceptual rather than formal, allowing for a powerful range of approaches and aesthetics. With group exhibitions, I expressly give each artist sufficient space so that their works can be understood on their own as well as in dialogue with the other artists. Of course, I shape this conversation – or these conversations – with my curatorial choices, but it is always so exciting to see the ways unexpected things that installations once talk to each other about space – especially when there is new work.

The inherent fragility of the material could pose a challenge to artists just to mold it in such a way that the pieces bear traces of the delicacy – a reminiscence of the past for the viewer. Carrying forward this sense of fragility, Cross observes that the works carry an element of spontaneity that is linked to the rawness of the abstract accidental. She mentions how artists who work with ceramics tend to accept accidents – a necessity when working with breakable objects. “Many of the works in the exhibition deal explicitly with abstraction – and abstract painting in particular. The three artists who share the large three-story central gallery (Francesca di Mattio, Nicole Cherubini and Linda Sormin) all engage Nicole Cherubini’s platforms are actually named after Fragonard, and her approach to composition and color—the way she uses glazes, colored clay, even spray paint—is in very painterly effect.Francesca DiMattio is forming a painter as well as a sculptor, and this comes through in her tile mural, the black marks on the surface functioning as expressive brushstrokes – which also seem to echo in the Nicole and Linda’s work, as if these expressive paint marks moved through the gallery,” says Cross.

Serving both functional and decorative purposes, ceramic works have remained largely outside the realm of art lovers or critics. To challenge such visions, artists step out of fine art conventions to create a web of conversation around works created in clay and art forms such as metalwork, basket weaving, quilting, furniture, to name a few. “The show is full of stories,” Cross says and hopes, “Viewers get a feel for it and the alternative possibilities the performers imagine.” If works sculpted in clay over the years have been devalued in Western culture, then artists have succeeded in pushing back the values ​​– and systems of oppression – that played a role.

The exhibition Ceramics in the expanded fieldtakes place at MASS MoCA, Massachusetts, through April 2023.