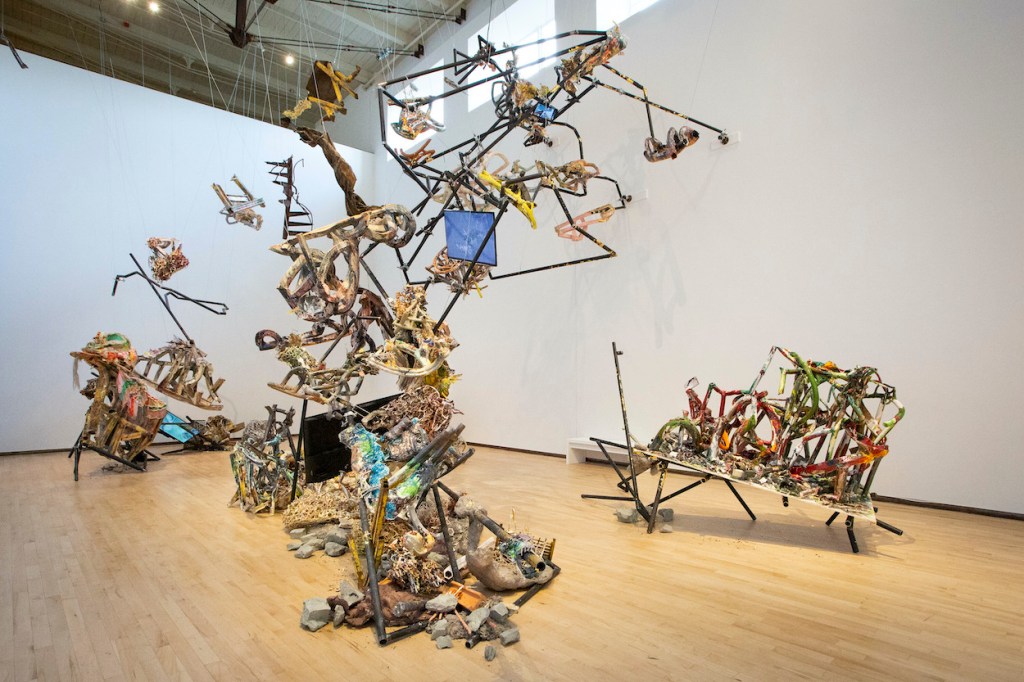 “Ceramics in the Expanded Field” brings together the multimedia uses of clay – ARTnews.com

MASS MoCA curator Susan Cross took the title of this exhibition, ‘Ceramics in the Expanded Field’, from Rosalind Krauss’s influential essay on sculpture – published in an earlier form in this magazine in 1979 – originally inspired ceramic installations by John Mason. Returning to ceramics, Cross both highlights the medium and suggests that it has exceeded its own limits as a category, as Krauss wrote of sculpture. The exhibition presents eight artists working with clay who draw on questions of history, identity and tradition, in particular the question of the usefulness of ceramics.

The show’s most impressive work is Linda Sormin’s gargantuan agglomeration of tangled clay tubes, more than a dozen video screens of varying sizes, a section of a spiral staircase, a dragon’s head used in the dances of Chinese festivals and rubbish, making bows in the air. in and around a zigzag metal framework. Although static, the shape suggests exuberant movement, like a whipped fire hose. Creation may at first seem apocalyptic, a triumph of disorder; on the contrary, its title, Flux (2020–21), highlights the video images of flowing water and abstract patterns as well as the sculpture’s overall flowing aerial configuration, reminiscent of the acrobatics of flying dragons in Chinese myth and art.

No other job here has so much power, although most have their own strengths. Anina Major also combines clay, video and structure in a work titled All of us cross the water (2021), partly referring to the African diaspora. The title appears in neon at one end of a wooden dock rising from an expanse of ceramic shards reminiscent of clusters of seashells; at the other end are three large pots, two of which are assembled like baskets. On a video monitor atop an adjacent smaller dock, hands with long blue fingernails demonstrate the process of weaving strips of clay, carefully handling the soft, vulnerable material in the form of a container. Except for the title, nothing is verbalized about the passage or the work, but a viewer can feel the pain of longing in the distance between this act of intimate craftsmanship, like braiding hair, and the dislocated appearance. docks on broken ground – a tension heightened by the video’s literal separation from the largest dock.

Rose B. Simpson presents a wall-sized photograph of her custom lowrider, painted in the black-on-black pattern made famous by potter Maria Martinez, who was, like Simpson, a Tewa artist from New Mexico. The work is beautiful, but an act of homage rather than an invention; she is more convincing Countdown (2020), comprising three eight-foot-tall ceramic figures, leaning their foreheads on a pole, balancing each other and seemingly sharing a condition or emotion. Huge, powerful, adorned with paint and necklaces, they are also painfully vulnerable, devoid of arms and feet. Armando Guadalupe Cortés presents a set of videos from 2017 in which he is constrained in a different way. He stands with ceramic pots attached to his long braids, swinging his head until they break or holding the vessels until his arms give way and the pots collide. It is a fascinating activity – a dance of pain and endurance – but is its purpose to honor traditional form and purpose, or to destroy it? The exhibit flyer claims the videos present a critique of gendered work, but that’s extra-visual.

Ceramic works by Nicole Cherubini, Jessica Jackson Hutchins and Francesca DiMattio have been widely exhibited in New York galleries. Within the framework of this exhibition, however, all seem tender. Cherubini adds photographs and potted plants to her vessels, and Hutchins uses her disassembled furniture and clay sculptures as sets for music and performance videos featuring damaged objects and crawling bodies. DiMattio creates three monstrous but wacky figures – encrusted with a teddy bear and Legos – in addition to an eccentric chandelier and a mural as carefree, but less witty as, 1992 by Ann Agee Lake Michigan bathroom wall. While DiMattio energetically combines decorative tile traditions from many cultures, Agee’s playful imagery adopts the well-known style of blue and white ceramics to render industrially produced bathroom fixtures.

Kahlil Robert Irving’s landscapes are the least satisfying contribution. In front of a wall-mounted digital print of the sky, it features tiled “floors” on low or table-height platforms: street trash, newspaper clippings, decals, cigarette wrappers and ceramic found objects set in clay. The titles, painstakingly crafted in color and typography, may suggest a search for place or identity, but the materials incorporated are so varied that it seems to be throwing everything away in the hope that something sticks.

Clay ultimately serves as a token here, symbolizing heritage (Simpson, Major, and Cortés) or environment (Hutchins and Irving), or challenging formal tradition through exaggeration (DiMattio and Cherubini). The irony is that nearly all of these works succeed on their own, but their placement in a medium-centric exhibition brings to the fore the question of how clay retains its meaning in this expanded realm.