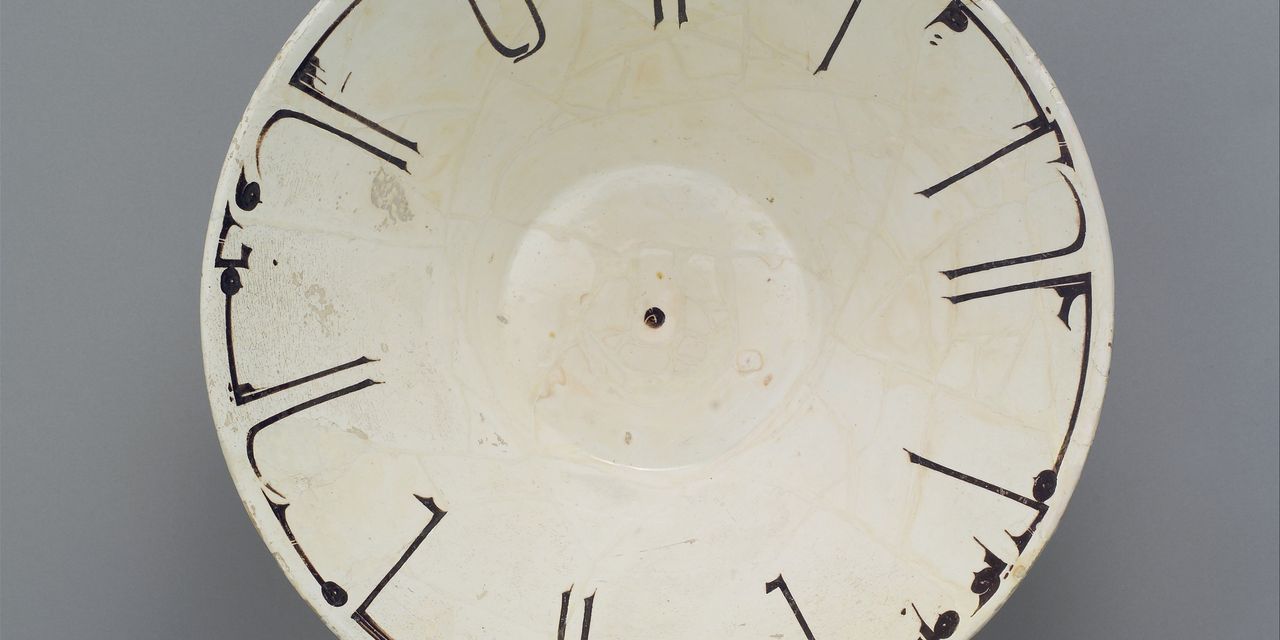 Set eye-level on a pedestal at the bustling entrance to an ornately decorated gallery of art from the Islamic world at the Metropolitan Museum of Art, an exquisite 10th-century Iranian ceramic bowl, free from gold or embellishments, effortlessly asserts its presence. Out of the visual noise of its surroundings, it stands quietly powerful in its simplicity and clarity. The decoration, in black-brown slip on a bare white background, is made up of fine bordered lines from which descend at regular intervals perpendiculars on its high, flared and thin sides.

Over a thousand years old, the design is fresh, minimalist, as if it had just been painted. The shapes seem to quiver with energy. Shortened, curved and elongated forms move within, their perfect balance of points, edges and curves punctuated at rhythmic intervals with horizontal strokes, forming abstract patterns of great purity.

But when we read the accompanying label, we discover, to our surprise, that these abstract patterns are words – the whole elegant design an inscription. One might expect it to convey an equally refined thought, something witty or poetic. Instead, the words are down to earth, offering simple advice for the good life: “Planning before you work protects you from regret; prosperity and peace”.

The bowl is an example of what is known as the Samanid epigraphic engobe, after the Samanid dynasty (819-999). The Samanids created an autonomous Sunni-Persian empire that controlled a large region of the eastern Islamic world, revived the Persian language and culture, and promoted the advancement of science and literature. Samanid epigraphic slip developed in the 9th century when local potters began covering the surfaces of earthenware objects with a wash of slip, a semi-fluid clay, mixed with a white pigment to give a lighter background decoration; the design was then applied in a mixture of black, red or brown pigments.

Since its discovery by art historians and collectors in the late 19th century, Samanid epigraphic ware has been recognized as one of the finest achievements of Islamic art. The product of a sophisticated urban society that flourished in eastern Iran and Central Asia, the bowl of the Met is stylistically similar to the black-on-white glazed ceramic tableware – bowls, dishes, cups, trays – unearthed in the 1930s and 1940s at the ancient city of Nishapur in present-day northeastern Iran.

Nishapur’s location along the Silk Road has made it a thriving trading center for cotton, silk, textiles and ceramics. It has become the main political link in northeastern Iran. The city was an important gathering place for many religious scholars and a wealthy artistic community. It was home to the native Persian-speaking population as well as a recent influx of Arab and Asian elites and merchants. It is easy to imagine a social setting in which this impressive bowl, seven inches high and 18 inches in diameter, was filled with a local delicacy and placed on the dining table of a sophisticated host, his proverb being a ” conversation piece” between the guests. .

While calligraphy was a major element of Islamic design on household wares, weapons and armour, and integrated into architecture, pieces of glassware like this bowl mark the appearance of the first substantial group of ceramics systematically decorated with calligraphic writings on bare backgrounds on which Arabic proverbs and wise sayings constitute the main form of decoration. They are among the earliest extant examples of Arabic proverbs and sayings to appear in the Islamic world. Many are inscribed with expressions of good wishes that bestow blessings on the owner or the general feeling of enjoy your food, referring specifically to the function of these vessels. But the majority of Samanid epigraphic pottery reveals a particular emphasis on codes of social and virtuous personal conduct, qualities prized in Islamic culture.

The calligraphy on the Met bowl is an early version of “new style” writing, characterized by tall, thin vertical axes and angular letters. The axes of the letters all point to the point in the center, drawn towards it as if it were a sun. It is a delicate cursive script widely used in the eastern part of the Islamic world by devout Muslims to record the Quran. The rigorous demands of rendering such script on a curved surface make the proverb on the Met’s bowl seem particularly self-referential: the admonition to plan before undertaking any work applies to the calligrapher himself. If he hadn’t planned the design with the precise placement of each of the words around the edge, he never would have had that perfect balance and rhythm. There would be no way to correct a mistake. Working together, the anonymous potter and calligrapher lived the wisdom of the proverb and created an object of ageless and unparalleled beauty.