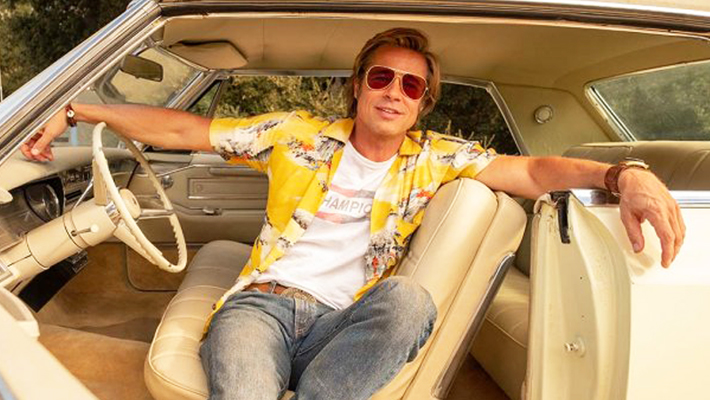 There’s a new profile of Brad Pitt in QG, in which novelist Ottessa Moshfegh visits him in one of his houses, which he bought from Cassandra Peterson, aka Elvira. There are a number of curious revelations. The first is that he owns a house that once belonged to Elvira, the Mistress of Darkness. (“It was the first place I bought when I made money in 1994.”) Another is that a “close confidant” is Flea. Another is that he once searched for buried treasure in a castle he owned with his ex-wife Angelina Jolie in France.

But in other ways, Pitt is a normal guy. Like all of us, he tried to adopt new skills during the height of the pandemic. Unlike most of us (but almost exactly like Seth Rogen), he actually pulled it off. Yes, that’s right, the big screen Cliff Booth really got into ceramics, including porcelain:

As we chat in his living room, Pitt slips away for a moment and then reappears, leaning over the couch I’m sitting on. He slams two incredibly heavy candlesticks into my open palms. I understand that these are his creations. As the pandemic progressed, he learned ceramics. The candlesticks are painted in black and gold and are very beautiful. “It’s porcelain,” he said. “Everything I read porcelain talks about being thin so that the light gets in, the thinner you get. It is a cardinal sin to thicken it. And yet that’s what Pitt did, and he succeeded. “What I like is the weight, like a Leica camera or a quality watch. You could throw it in the ground and someone could dig it up 2,000 years later because it had undergone a volcanic reaction.

Pitt also assumes he has prosopagnosia, a rare condition in which he has trouble recognizing people’s faces, leading some to mistakenly think he’s “aloof and aloof, unapproachable, self-centered”, as says Moshfegh.

It’s a pretty deep interview. At one point, the two recite lines of poems by Rilke and Rumi to each other, with the star of Meet Joe Black talking about how “when you simultaneously carry real pain and real joy, that’s maturity, that’s growth.” At one point, Moshfegh tells Pitt that “the heart just might be broken”, to which he replies, “I think all of our hearts are broken”.

When the interview is over, Pitt sends her an email in which he expands on the topics they discussed, which he’s divided into three sections: “Summary, Clarification, Rumination.” He also tells her, “I consider myself on my last step.”

But there’s also happier news: after admitting that he “always felt very alone in my life,” Pitt adds that he’s changed for the better, that “it’s only really recently that I had a bigger embrace with my friends and family. “It’s a beautiful thing to learn from a story in an issue of a magazine with a rather odd cover image:

At fifty, every man has the face he deserves, and Brad Pitt deserves to look like the plaintiff in a lawsuit against an unlicensed Botox clinic https://t.co/FTamxEZTTs