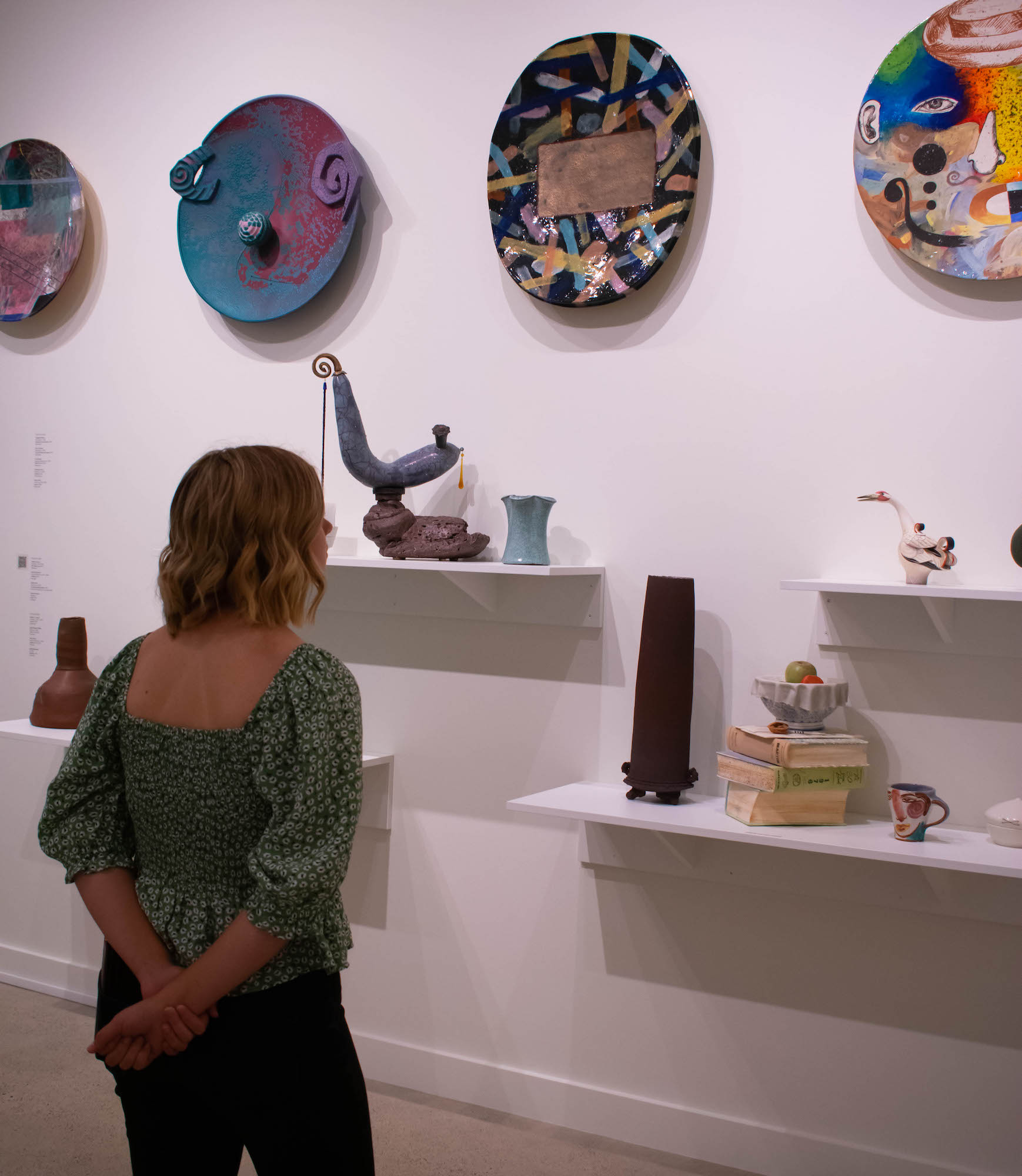 A new collection of “discovered” ceramics at NEHMA

The room is quiet, nothing disturbs the still air except the few visitors who stop to observe the various shapes, colors and sizes of the ceramic displays in front of them. Some read the information plates; others simply stand there, enjoying the unique patterns and textures that can only be found in an artist’s mind.

The Nora Eccles Harrison Museum for Art, or NEHMA, opened its new exhibit, “Unearthed: The Ceramics Collection and the Woman Behind It,” on August 30.

An official reception will be held on Saturday, September 17 from 6 to 8 p.m. This will be an opportunity to present the exhibit to the students, and food and drinks will be served.

The exhibition highlights Nora Eccles Harrison – ceramics collector and potter herself – with a section dedicated to her work as a driving force in the world of ceramics.

Eccles was a relatively unknown Logan native in the art world. She grew up in one of Utah’s wealthiest families and helped found the museum with a $2 million gift from the Eccles Harrison Estate, including 400 ceramic pieces from her personal collection.

NEHMA has been operating successfully since 1982 and will be celebrating its 40th anniversary at the next reception.

“What I hope to achieve with this exhibition is to draw more attention to [Eccles] with its role in ceramics in the West,” said Katie Lee-Koven, the museum’s managing director and chief curator. “She really developed relationships with the artists she collected. She was friends with them, she wanted to learn with them, but she is a very unknown figure in the world of ceramics.

“Unearthed” contains 300 ceramic pieces and highlights 211 artists. Organized chronologically, the exhibition features early 20th century art at the front, with current and contemporary pieces continuing at the back.

A main theme of the exhibition is the evolution of ceramics over time.

During the 1920s, ceramics and pottery began to take root in mainstream culture, bringing with them many Native American influences. The rise of studio ceramics and the transition to personal expression began in the 1930s and 40s, and more abstract themes and pieces took over in the 1950s and 60s.

A prominent artist of the 60s was Peter Voulkos, who experimented with non-traditional pottery techniques. Voulkos paved the way for artists of the 70s and 80s who completely deconstructed what it meant to be a ceramicist.

Sessions explained how the 1970s were decisive for the world of ceramics. Ceramics has become more of an art form than a craft. Ceramists were given permission to do more than just make a pot.

Since 2000, the art form has changed again and artists are now using ceramics to convey political and personal statements.

“It expands knowledge of history and cultures and our world,” Sessions said. “Artists usually think a lot about the big picture. It’s a way for students to have a bigger picture of the world and a bigger story of the world because it’s expressed in the art. It gives students a space to think about these things about our culture and the world and what’s going on.

Today, the rise of technology has made the art form accessible to a wider range of audiences and artists.

Informative descriptions are included on the exhibit walls, giving more history and context about the pieces. The curators struggled to include all the information they felt was necessary, so QR codes are also displayed in the room for visitors to scan and access more information about the exhibition, art and artists.

The museum has 1,300 items from the ceramics collection. Curators reviewed them by time period, shortlisted, and then strategically considered the balance of artwork over the past 100 years to narrow down what would be featured.

“We considered, ‘Do we have a balance of women who are represented or under-recognized artists? Are Native American ceramic artists represented? Are there USU alumni represented? Said Lee-Koven.

In the background, a soft voice is heard throughout the exhibition. To the right of the main entrance are two seats and a video feed featuring Maria Martinez, a famous Pueblo potter.

Taken in 1952, the video shows a week of footage of Martinez’s process in making traditional Pueblo black-on-black pottery. The voice-over is done by Susan Peterson, another prominent artist of the time.

Curators suspect that some of the pots made in the video are pots donated to the museum by Eccles.

“This is an exhibit I’ve wanted to do for a long time because we have probably one of the – if not the best – collections of American studio ceramics in the West,” Lee-Koven said.

The museum currently employs seven students and eight staff members. Ten of these people were directly involved in the organization of the exhibition. Sessions, Lee-Koven and Matthew Limb were the curators of “Unearthed”, which took a year and a half to prepare and open.

“This exhibition is different from what we have had in the past since it is only ceramics, but NEHMA generally strives to exhibit objects from minorities, whether women, ‘Native American or African American,’ said Shaylee Baggetts, a USU art history. NEHMA student and employee. “A lot of the sections focus on female and Native American artists, which I think is really cool. It’s eye-opening to see the perspectives of those not normally represented in art museums.

Lee-Koven recalled that NEHMA is a student museum. It exists for students to use, and there are plenty of events to attend, including a community art day and various wellness programs.

For more information on the “Unearthed” exhibition, other exhibitions currently open or general museum news, go to https://artmuseum.usu.edu/.

With input from PETA, Department of Transportation ends requirement for skin corrosion testing in animals