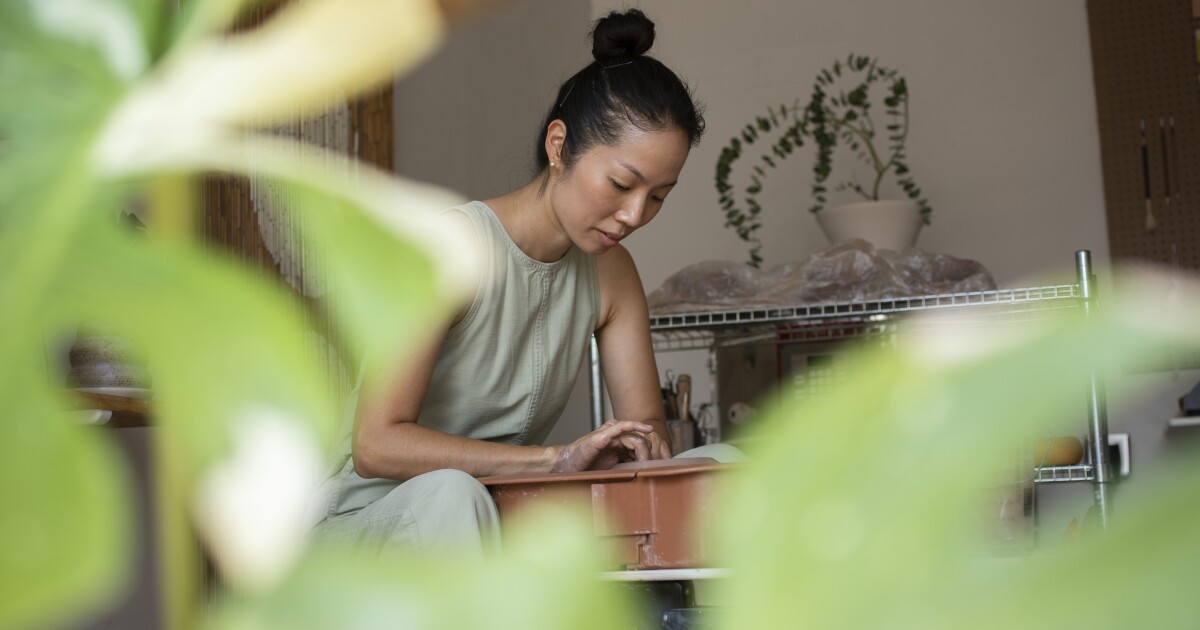 This is the latest in a series we call Plant PPL, where we interview people of color in the plant world. If you have any suggestions for PPL to include in our series, tag us on Instagram @latimesplants.

Mipa Shin sits on a low metal stool next to her pottery wheel and prepares to talk about indoor plants. Smiling, gesturing to the planters that line the shelves of her one-car garage-turned-ceramics studio, her excitement grows, as does her favorite plant: the tall, statuesque Adenia venenata.

She loves caudiciform succulents — plants that have a round caudex above the ground — and designs chunky planters that show off the plant’s swollen stem. She’s a big fan of fern-leaved cacti, which she likes to grow at the bottom of her UFO-shaped hanging planters and is known for delicately draping in a heart shape. Dischidia ruscifolia variegata from the mouth of its macaroni-shaped containers.

Shin’s planters are difficult to label because she designs each to complement the rare plants that capture her interest. That’s what makes them so special: each vase is inspired by her love of plants. There are chocolate brown and speckled buff vessels for the caudex, pagoda planters for Glaucous adenia, glazed checkerboard pots for willows, striped planters for Pilea peperomioides and philodendrons, and donut-shaped containers for hoyas and air plants.

Shin says it’s undeniable, albeit unintentional, that her background influences her work. “There is a Korean term ‘yeo-baek’ which is meant to convey an aesthetic ideal of empty space and simplicity,” she says. “I don’t intentionally try to design my pots in this style, but I think to some extent it’s the style that comes naturally to me as a Korean.”

Three years ago, Shin lived with more than 50 houseplants in the bedroom of his Koreatown apartment. The Korean dancer and choreographer became so obsessed with plants that she set herself a goal: “I want to do something to dress up every plant.” She now creates custom ceramic planters full-time in the garage behind her Cypress Park home.

Shin, 35, was born in South Korea and moved to New York, where she earned a master’s degree in dance from New York University.

She focused on choreography and when she moved to Los Angeles in 2017, she taught Pilates not far from the tiny one-bedroom apartment she shared with her husband, Isaiah Yoo.

“In New York, I’ve always lived in tiny places,” she says. “So my apartment in Koreatown was no different.”

What was different was her obsession with plants, which struck her at a time when she missed the Korean landscape.

“I grew up in Korea, my family was surrounded by green mountains, and my mother always maintained her own collection of indoor plants,” she says. “So I used to always be around nature and plants. When I moved to New York and later to Los Angeles, I realized how close being close to the I missed nature, and I think that’s one of the main reasons why I fell in love with plants.They allow me to always be close to nature.

She vividly remembers the first plant she bought, a small cactus from Ikea. “I still have it,” she said. “After that I started buying plants and couldn’t stop.” When a friend recommended Mickey Hargitay Plants in West Hollywood, she was captivated by the rare and exotic varieties she discovered there. It wasn’t long before she had over 100 plants in her apartment.

“My husband thought I was crazy,” she says with a smile.

When a colleague invited her to attend a class at the ceramic studio across from the Pilates studio where they worked, Shin saw it as a way to break up her teaching schedule.

But soon she was skipping lunch so she could throw pans every day.

She was also overwhelmed by the plants invading her small apartment, so she began selling them, including the cuttings she propagated, on Facebook Marketplace and Instagram.

“I was selling plants for fun, but I quickly realized that people really take plants seriously,” she says.

Likewise, his followers were equally serious about the pots featured on his posts. She was selling plants, but people wanted to know if she was selling her pots.

Following the enthusiastic response to her ceramics, Shin moved on to selling planters on Instagram and Etsy, where her handmade containers sold out as quickly as she could post them.

It was a transition that she still tries to accommodate in her daily life. While she would like to one day set up a greenhouse and propagate more plants, Shin says that for now she is trying to manage what she can as a one-woman small business with a 10-month-old child. the House. Sometimes the logistics are demanding. Shin says she used to throw pots two weeks before giving birth and now prunes her pots when Holly sleeps. Packing and shipping fragile ceramics can also be exhausting. “One time it took me four days to pack 100 jars and get them all to the post office and UPS,” she says. “I got sick for three days.”

But she’s not complaining.

Shin loves what she does – she even chose her home because of its proximity to the Pottery Studio in Cypress Park – and although she had to curb her obsession with houseplants after Holly was born – ” my baby is catching everything right now” – her new career has brought her into contact with her clients, half of whom live in Los Angeles.

With the recent increase in hate incidents against Asian Americans and Pacific Islanders, Shin says she was lucky. “I was home a lot during COVID so I didn’t experience racism. But I worry about my parents. My mom had planned to come visit her, but I was glad she didn’t because I didn’t feel comfortable with her visiting at the moment.

In anticipation of the holidays, Shin plans to do a Holiday Store update in mid-November or late November. (She announces the date and time of her shop updates on her Instagram account @mipas_pots_and_plants a week before her planters are posted on her website. Plants and pots are sold separately and pickup is available at Cypress Park). “I’m going to do my best to make enough pots for those who want them,” she said. “Being part of this plant community has allowed me to meet so many people. They have become my friends.