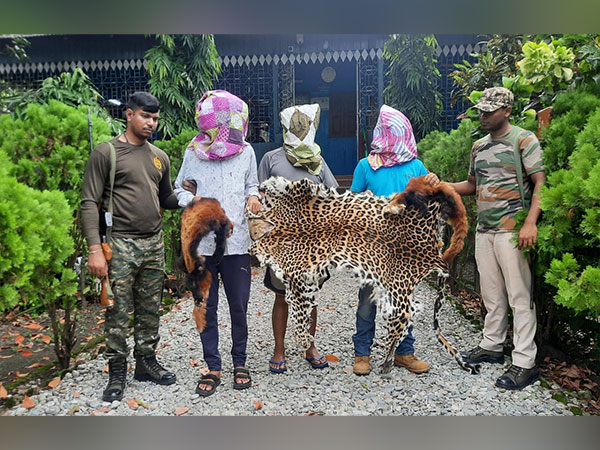 Jalpaiguri (West Bengal) [India]August 17 (ANI): Belacoba rangers seized an adult leopard skin and two red panda skins in Belacoba forest under Baikunthapur forest division in Jalpaiguri district, and arrested three Nepali nationals.
The team of forestry officers led by Sanjay Dutta Range Officer of MPP-I Range acted on the information given to them by their sources and nabbed the suspected smugglers last night.
According to forest officials, they intercepted a motorbike numbered in Nepal based on reliable information near the University of North Bengal campus on the national highway.
They were able to get hold of the three defendants, but one defendant managed to escape.

During the investigation, it was discovered that the defendants were going to deliver the skins to the Indo-Bhutanese border area more particularly Phuntshilling (near Jaygaon) for a sum of Rs 30 lakh. It was supposed to be smuggled into Bhutan through the Siliguri corridor.
The defendants collected the wildlife items from Taplejung, Dist Mikwakhola, Nepal, and were supposed to deliver them to Bhutan Counterpart to a Chinese customer.
The accused persons were identified as Chandra Prakash Chemjong (35 years old), Gobinda Samba Limbu (25 years old) and Yakpu Sherpa (37 years old) residents of Nepal.
Hari Krishnan, MPO, Baikinthapur Forestry Division, said over the phone: “A team of rangers from Belacoba intercepted three people riding a bicycle registered in Nepal and during the search operation they were found with the contraband items. We are trying to gather more information and hand it over to Jalpaiguri District Court today.
The defendants were charged with breaches of Sections 9,39,44,49B, punishable under Section 51 of the Wildlife Protection Act 1972. (ANI)